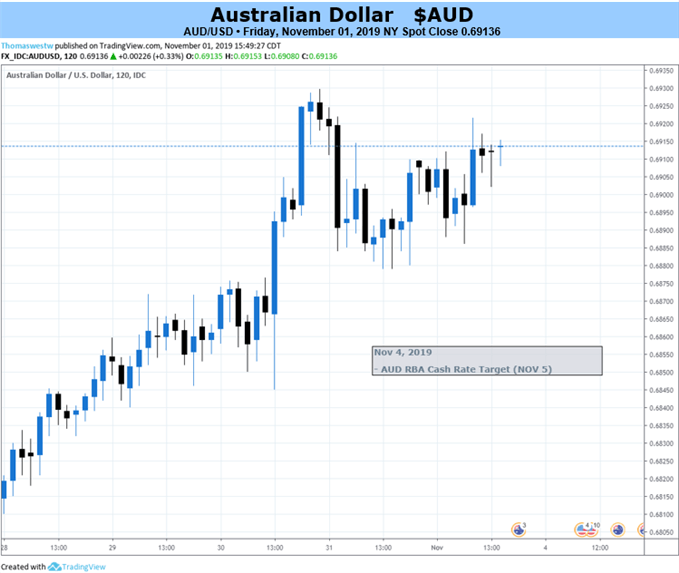 The Australian Dollar’s main focus in the coming week will be on Friday’s monetary policy decision from the Reserve Bank of Australia.

The market thinks its 95% certain that the record low, 0.75% Official Cash Rate will be staying put for another month, with the chances of one more reduction over the next eighteen months still gingerly priced in.

Clearly investors will want to see whether the RBA appears to leave such a possibility on the table, but the currency is at least as likely to be in thrall to US-China trade headlines and the Brexit story, to which the Aussie is quite sensitive. Only the Pound itself regularly moves more on this.

AUD/USD rose to three-month peaks last week as lower US borrowing costs inspired a bit of confidence even if it’s clear that the Fed hasn’t got a consensus for any more reductions in the near term. It was stymied, however, by a Bloomberg report that cast some doubt over the possible longevity of October’s trade ceasefire between Washington and Beijing.

As for the coming week’s trade, it is possible to make the case that the Aussie will continue to enjoy an improved bid as long as risk appetite holds up. The RBA may not sound especially dovish on interest rate prospects either, likely reserving the right to act but giving few clues that it will anytime soon. After all we learned last week that Australian consumer price inflation was developing just about as the central bank expected. It’s still nowhere near target, but it’s not decelerating either. 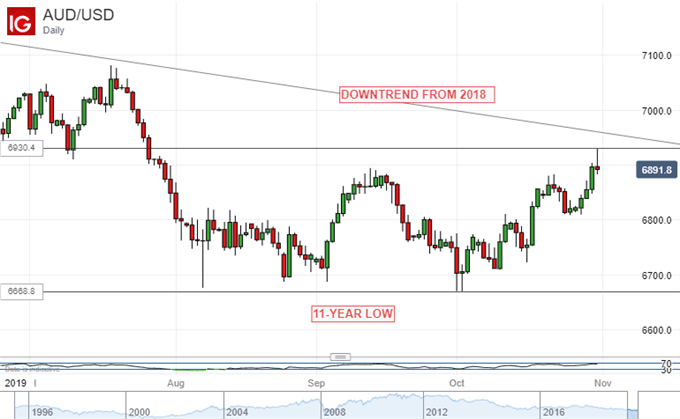 The Australian Dollar might therefore go higher yet, assuming trade headlines let it. As they can’t be forecast it’s a moderately bullish call this week.