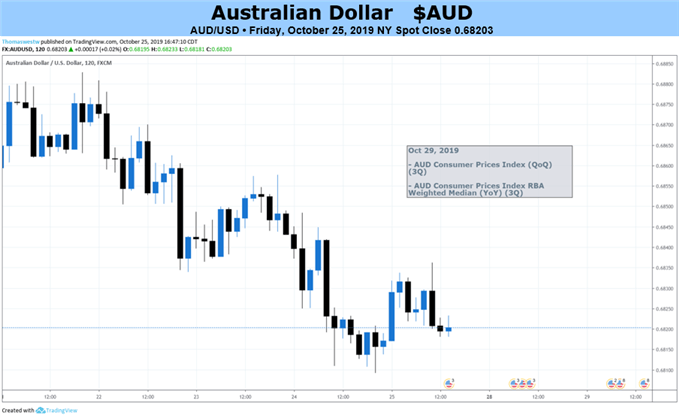 The Australian Dollar will like all other tradeable assets be focused on the United States in the coming week. The US Federal Reserve will give its next monetary policy decision on October 31.

Like most pro-cyclical units, the Aussie has risen into this event. With the Fed long seen as all-but certain to cut interest rates there’s reason in that. The currency also got some support this month from hopes of progress in both the US/China trade story and the tortured saga of Brexit.

However, it has since become clear that neither tale is anywhere near resolution. Nevertheless AUD/USD remains very close to its October highs suggesting that the prognosis for lower US interest rates was always its primary driver. 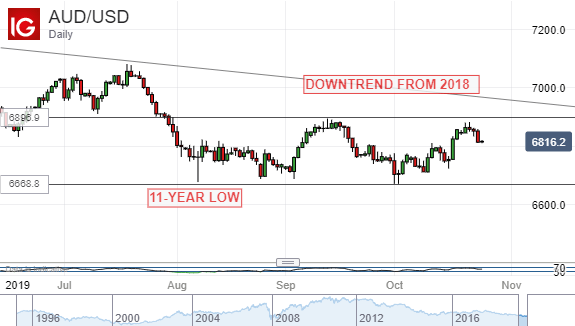 It may be primary, but it won’t be alone. Wednesday will bring markets their first look at official Australian consumer price inflation data for the third quarter. The annualized growth rate is expected to remain subdued at 1.6%, well below the 2% lower band of the Reserve Bank of Australia’s target area.

Aussie Inflation Should Remain Weak, But Central Bankers Expect This

However, the RBA has expected this outcome for quite some time and, should it be delivered, it’s doubtful that expectations of Australian interest rate policy will change much. Clearly a significant undershoot would increase rate-cut bets and, in all probability, weaken the currency, so be on careful watch for that.

RBA Governor Philip Lowe is due to speak on Tuesday. This will only be a day before that crucial CPI release and, as such, he may not give much away. Markets may be tempted to interpret anything he says as a steer on the data, and central bankers tend to avoid being accused of that if they can.

Still, all up this week is likely to be at least comforting for risk appetite, assuming the Fed plays ball and doesn’t sound too opposed to further monetary largesse. If Australian inflation doesn’t collapse (and it’s not expected to) the Aussie should at least be supported by this.

Headlines around trade or Brexit will retain the potential to derail optimistic market bets, but they are very hard to predict. On the basis of what we can know, it’s a cautiously bullish call.

The longer-term backdrop for AUD/USD, at least, remains quite bearish, however, with the long downtrend from late 2018 under no serious threat.