The Australian Dollar spent the last week like most other widely traded assets in thrall to headlines related to trade talks between the US and China.

As one of the world’s pre-eminent growth correlated currencies, the Aussie was of course stronger when those headlines were hopeful, weaker when they were gloomy. That story will remain pivotal for the Australian Dollar’s daily chart performance in the near term, but AUD/USD remains very close to eleven years lows, with the entrenched downtrend in place since late 2018 under no realistic threat whatsoever. 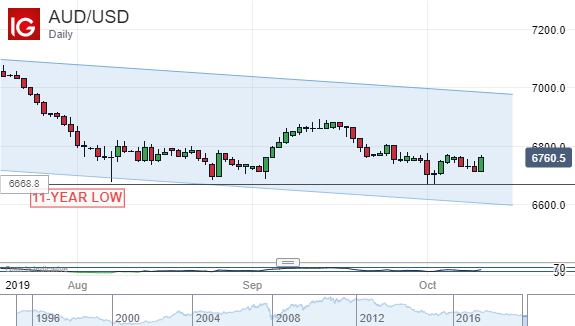 Trade news aside, the coming week will see two important pieces of domestic Australian economic intelligence. On Tuesday investors will get a look at the minutes of the last Reserve Bank of Australia monetary policy meeting which took place on October 1. The central bank cut the Official Cash Rate to a new record low of 0.75%, taking it below 1% for the first time.

Futures investors think yet another cut is coming, with the chance of a move in November rated about 50/50 in that market about now. With that in mind clues as to whether the RBA might concur will be eagerly sought. However, there is evidence that the last cut may not have had quite the desired effect, especially when it comes to boosting consumer confidence. Westpac’s snapshot found Australian shoppers as miserable as they’ve been for four years in October, despite those lower rates.

Official Australian employment numbers are also due this week. The country’s job-creation machine has long been formidable, if resolutely non-inflationary. However, the last lot of data on this subject saw a surprise fall in full-time hiring and the market will be on alert for further falls. Things could get ugly indeed for the Australian Dollar if those are delivered.

All up then quite a busy week for the currency, but is it likely to change anything? On the basis that the RBA is unlikely to sound anything but dovish, and that employment data could disappoint again, it’s a bearish call this week.

But do watch out for those trade headlines.