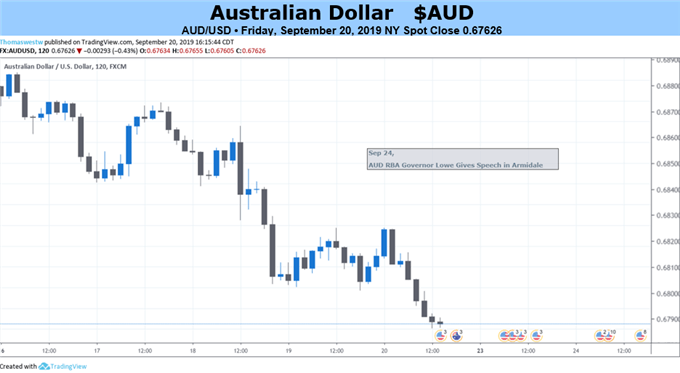 The Australian Dollar took a bit of a beating last week, snapping the broad uptrend which had sustained bulls since early September.

A few disparate factors came together to hammer the currency, some are likely to prove transient, others perhaps less so. Drone strikes against important Saudi crude oil infrastructure frightened pro-cyclical assets all over the world, Australia’s currency among them.

Closer to home the Australian central bank appeared to leave the door wide open to still-lower interest rates in its last set of monetary policy meeting minutes. The Aussie already offers substantially lower yields than the US Dollar, with the prospect of further rate cuts likely to keep the interest-rate differential very much in the greenback’s favor despite last week’s reduction by the US Federal Reserve.

Finally, there were official Australian employment data. Headline job creation was extremely strong but the details were much less cheerful. Part-time positions accounted for all that strength with the full-time hiring in surprise decline. The unemployment rate ticked up too. Now, one month isn’t going to darken the economy’s unarguable bright spot to any great extent. But it will mean that this series is very much in focus next month.

The coming week offers very little in terms of RBA activity or heavyweight economic data. RBA Governor Lowe is due to speak on the 24th and with the markets pricing in another interest rate cut as soon as November, he’ll be listened to very attentively.

However, assuming he’s no more dovish than usual the Aussie is going to remain in thrall to overall risk appetite. There are plenty of potential reasons why that might take flight, but it is securely underpinned by a better tone in trade talks between the US and China. Still, in the absence of other clear positives it has to be a neutral call this week. 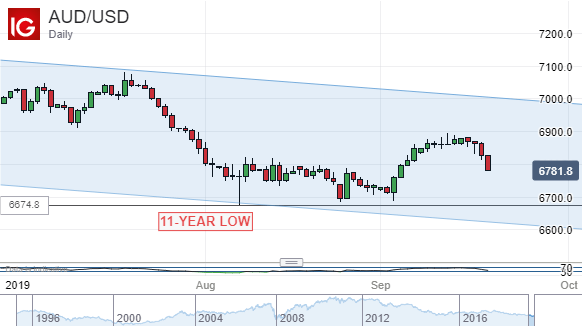