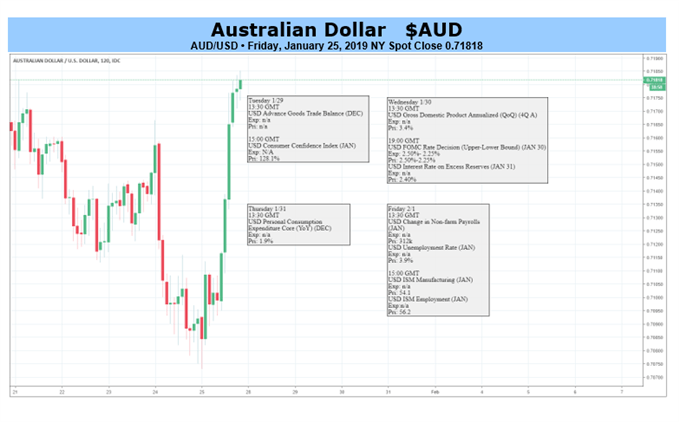 The Australian Dollar struggled this past week to maintain gains following a better-than-expected domestic jobs report. Even though the unemployment rate ticked down to its lowest in over seven years, the labor force participation rate edged down. That might have been due to discouraged workers exiting the labor force which is not necessarily the most optimal scenario.

After the jobs report, the National Bank of Australia (NAB) increased lending rates on variable home loans and AUD/USD tumbled. This likely further cooled prospect for an RBA rate hike in the near-term. At the time of this writing, overnight index swaps were pricing in about a 41.5% chance of a cut by November. As a reminder, Governor Philip Lowe still favors a hike as the next move while rates hold steady in the interim. Granted, there has not been an RBA rate decision since December. The next one is not until February 5th.

With that in mind, rosy local economic data may not do much to inspire RBA rate hike bets (but it may diminish dovish expectations). This coming week contains fourth quarter Australian inflation, private sector credit and wholesale inflation data. While they might encourage near-term volatility in the Aussie Dollar, lasting follow-through may have to wait until we get the next update from the Reserve Bank of Australia.

For those that are curious, Australian economic news flow has been tending to underperform relative to economists’ expectations according to Citigroup. But, it has been by an increasingly shrinking margin as of late. It would not be too surprising to see more of the same ahead. Meanwhile in the US, data has started outperforming.

Given the economic event risk from abroad, the sentiment-sensitive Aussie Dollar will probably spend a good portion of its time focusing on that. In the US, this coming week contains a plethora of economic statistics. These include items such as the first estimate of fourth quarter 2018 GDP, January’s nonfarm payrolls and the Fed’s preferred measure of inflation, the PCE gauge.

Speaking of the Fed, there is also that. January’s monetary policy announcement is due in the middle of the week. The central bank has recently dialed down its hawkish rhetoric as Chair Jerome Powell stressed the importance of being data dependent. Due to the partial government shutdown, some of that data has been absent. Given the sudden plethora of USD risk and ongoing trade negotiations with China, the pro-risk Australian Dollar could be facing a particularly volatile week.