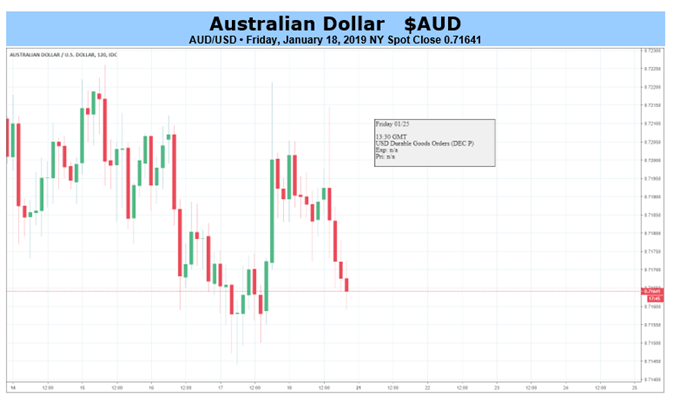 AUD/USD trades near the monthly-high (0.7235) as a growing number of Federal Reserve officials abandon the hawkish forward-guidance for monetary policy, but fresh data prints coming out of China, Australia’s largest trading partner, may drag on the exchange rate as the world’s second largest economy is expected to grow at the slowest pace since 2009.

The AUD/USD rebound following the currency market flash-crash may continue to unfold ahead of the first Federal Open Market Committee (FOMC) meeting for 2019 as Chairman Jerome Powell & Co. show a greater willingness to adopt a wait-and-see approach for the foreseeable future. 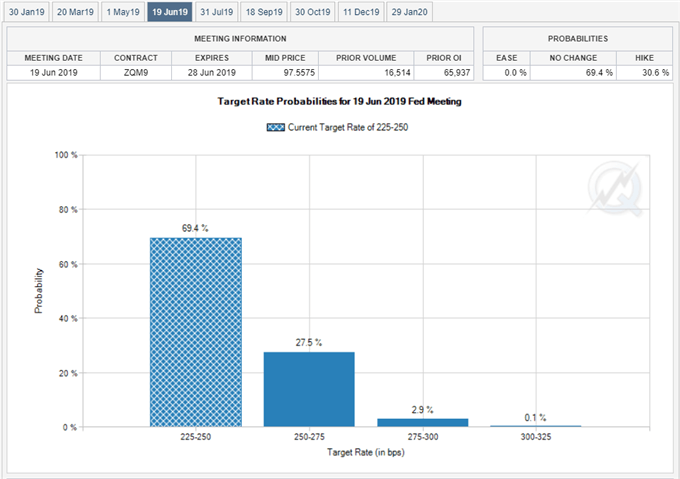 Little to no bets for an imminent Fed rate-hike is likely keep AUD/USD bid as the central bank is expected to keep the benchmark interest rate at 2.25% to 2.50% on January 30, and Fed officials may continue to change their tune over the coming months amid the uncertain surrounding fiscal policy. In turn, Fed Fund Futures may continue to show the FOMC on hold throughout the first-half of 2019, but fresh data prints coming out of China may produce headwinds for the Australian dollar should the developments cast a weakened outlook for the Asia/Pacific region.

Updates to China’s Gross Domestic Product (GDP) report may undermine the recent recovery in AUD/USD as the growth rate is expected to narrow to 6.4% from 6.5% per annum in the third-quarter of 2018, and signs of a slowing economy may keep the Reserve Bank of Australia (RBA) on the sidelines in 2019 as ‘there was no strong case for a near-term adjustment in monetary policy.’ In turn, a 18.0K expansion in Australia Employment may do little to impact the monetary policy outlook amid the slowdown in global growth, and Governor Philip Lowe & Co. may continue to buy more time at the next meeting on February 5 as ‘the outlook for household consumption continued to be a source of uncertainty because growth in household income remained low, debt levels were high and housing prices had declined.’

With that said, AUD/USD may face a more bearish fate as China is expected to grow at the slowest pace since the Great Financial Crisis (GFC), and the flash-crash rebound may continue to unravel over the coming days as the Relative Strength Index (RSI) appears to be responding to the bearish formation carried over from late-2018. Sign up and join DailyFX Currency Analyst David Song LIVE for an opportunity to discuss potential trade setups!

The flash-crash rebound appears to be losing steam ahead of China’s GDP report amid the string of failed attempts to break/close above the 0.7230 (61.8% expansion).