Australian Dollar Bulls Might Get A Little Help From The Fed 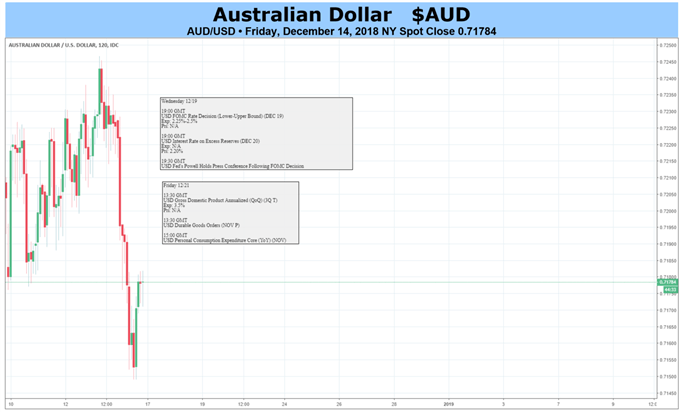 The Australian Dollar’s revival of fortunes against its US cousin goes on, underpinned as it has been since its November beginnings by two key factors.

The first is hope for a trade rapprochement between Washington and Beijing. China is the prime customer of Australia’s vast raw-material export machine, while the US is an indispensable partner for Canberra on security matters. So, Australia has much to gain from a trade thaw between the two global giants. More indeed than any other third country, arguably.

And no doubt trade headlines, if they come, will move the Aussie this week. But their timing is impossible to predict. Federal Reserve monetary policy meetings meanwhile are timed with scrupulous regularity. One is coming up early on Wednesday, Australian time.

That brings us to the second AUD/USD prop. Much of the pair’s recent vigor has been rooted in the thesis that US rates may not rise as much in 2019 as investors had previously thought. This seems reasonable. Economic uncertainties abound, from Brexit to rising US deficits and clear signs of economic slowdown around the world. Moreover, the Fed has already raised rates eight times from their financial crisis lows. A pause for reflection could be easily justified.

So the Australian Dollar market will likely be stuck like all others while it waits to see what the Fed has to say on Thursday.

It’s certainly worth pointing out that the Australian Dollar will lack interest rate support even if the US central bank does chart a more cautious monetary course into 2019. Aussie futures markets now see no increase to the country’s own record-low, 1.50% Official Cash Rate for at least eighteen months ahead.

Still, if the Fed delivers its expected December rate hike but then suggests it’s going to hold off for a while then AUD/USD will probably hold up and may make further gains.

It’s a bullish forecast this week.