Australian Dollar Might Get Some Respite If Inflation Holds Up 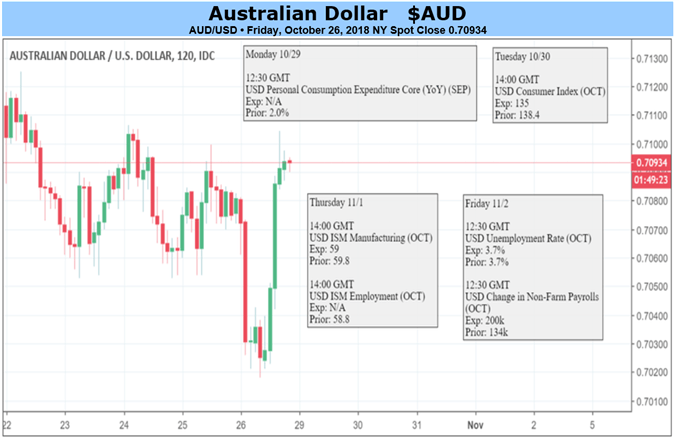 The Australian Dollar continues to languish close to this year’s lows against its US cousin, but, while there’s little scope to expect a turnaround, matters may not get much worse for its bulls this week.

The currency remains primarily beset by the yawning gap in monetary policy approaches between the Reserve Bank of Australia and the US Federal Reserve. While the Fed seems resolved to go on raising interest rates whatever President Donald Trump’s reservations , the RBA seems set to keep its own key Official Cash Rate at its 1.50% record low for many months yet. Indeed futures markets still don not predict a move for all of next year.

Against this backdrop is a foreground of worries about trade wars, bringing with it a general atmosphere of market risk aversion, which tends to play against growth-linked currencies such as the Aussie. Australia is after all linked to the trade spat’s two great protagonists, China and America, in numerous intertwined ways.

On top of all this comes political risk. There has been plenty of churn at the top of Australian politics in the last ten years or so. The country has had six Prime Ministers since 2007 and the ruling party’s loss of of a key by-election in Sydney last week suggests that 2018 could bring a seventh.

So, the Australian Dollar remains unlikely to look like a screaming buy this week, for whatever should occur is most unlikely to play against all of the negatives now plaguing it. However, investors will get a look at official domestic consumer prices. Those data come due on Wednesday.

The second quarter’s annualized rise of 2.1% put inflation back within the RBA’s 2-4% target band for the first time since the final quarter of 2016. If it holds up, or even edges ahead then the momentum lower in AUD/USD could be halted, even if it is unlikely to stop for long. After all the RBA’s mandate is to keep price rises within that band ‘over time,’ not merely to get them up there on occasion.

Still, signs of sustainably higher prices may yet give the Aussie a bit of support and, assuming the absence of more left field bad news, it’s a neutral call this week.