Australian Dollar Held Up Last Week, May Not Do So Again 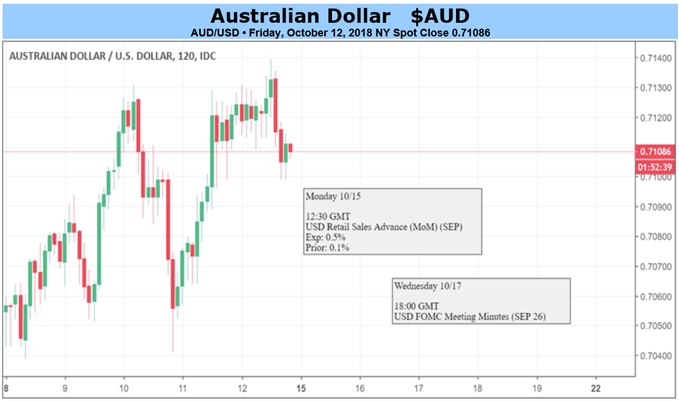 All of the factors that have weighed on it over the past year remained very much in place. Some of them even intensified. The huge differential in monetary policy between a still-tightening Federal Reserve and a Reserve Bank of Australia stuck in post-crisis accommodation mode was as obvious as ever. Trade-war fears appeared to intensify, stocks tanked and the International Monetary Fund downgraded its global growth call. That should have mattered to the growth-linked Australian Dollar’s fortunes at the best of times but, in the process, the IMF also trimmed its China forecasts. Of course, China mattes hugely to Australia’s export machine. Yet AUD/USD held reasonably firm through all of the above.

It even failed to slip much when RBA Governor Lowe said in Indonesia that he and his colleagues welcomed the current bout of US Dollar strength and hoped for more ‘spillover effects from it,’ by which me must assume that he meant an even-weaker Aussie.

Still AUD/USD held up above the lows of the past two weeks.

Even so, it is hard to get overly bullish. The currency faces too many fundamental negatives and the long AUD/USD downtrend in place all year remains very much the daily chart’s dominant feature.

It does seem to be trying to settle into something of a range, suggesting that perhaps some in the market think its long punishment beating has gone on for long enough. This is a thesis that will need much more evidence, though and the pair will remain hostage to global risk appetite. If that wanes again, it will fall further.

However, there is a plethora of likely data points for Aussie traders this week, from domestic employment data and the leading index through official Chinese growth numbers. While job creation is likely to remain strong, this fact alone may not be enough to support the currency. Indeed, it has failed to do so all year.

A neutral call is tempting this week, but it just doesn’t quite work given all the known risk events and the likelihood of some unknown ones, probably from the global-trade story’s direction. It’s another bearish forecast, but a cautious one.