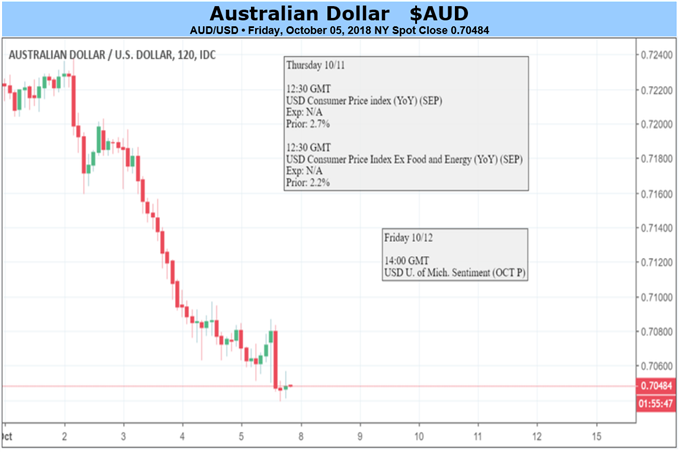 The Australian Dollar market will receive plenty of economic data in the coming week, but none of it is likely to shake the currency out of its deepening downtrend against the US Dollar.

Snapshots of consumer and business confidence will top the domestic data bill on Tuesday and Wednesday, respectively. Meanwhile a look at China’s private service-sector performance and overall trade both stand a good chance of influencing AUD/USD at least in the aftermath of their release thanks to Australia’s strong export links to China.

However, that pair now hovers near lows investors won’t have seen since February, 2016. It is also right in the middle of the long, daily-chart downtrend that has endured for all of this year.

AUD/USD Remains In Thrall To Rising US Rates

The underlying reason for this weakness remains of course the widening interest-rate gulf between Australia and the US. The Federal Reserve has raised interest rates eight times since it began the process in 2015. The Reserve Bank of Australia for its part continues to hold its own key Official Cash Rate at a record-low of 1.50%. This has been unchanged since August 2016 and, according to futures markets, is still expected to stay put for the rest of this year and all of next.

With this policy divergence as the backdrop, AUD/USD can’t hope for much in the way of long-term support unless the economic data should start to point unambiguously to the sort of inflation uptick which might mean that higher rates are priced in sooner. At last look Australian consumer-price inflation was running at an annualized clip of 2.1%, just within the lower boundary of the RBA’s target band. So there’s clearly no sign of any such data at present.

The coming week will not offer any so, it’s hard to see the Australian Dollar getting much traction. Of course, trade-related global risk appetite also plays a huge part in day-to-day market action. A lack of belligerent headlines on this subject from either Washington or Beijing could see that appetite revive, probably to the benefit of growth-related currencies like the Aussie. However, this sort of thing is impossible to predict so, on available evidence, it has to be a bearish call this week.

US dollar Forecast – US Dollar May Extend Rally on CPI, Churning Market Sentiment