Australian Dollar Gains May Be Stymied By Fed Meet, Aftermath 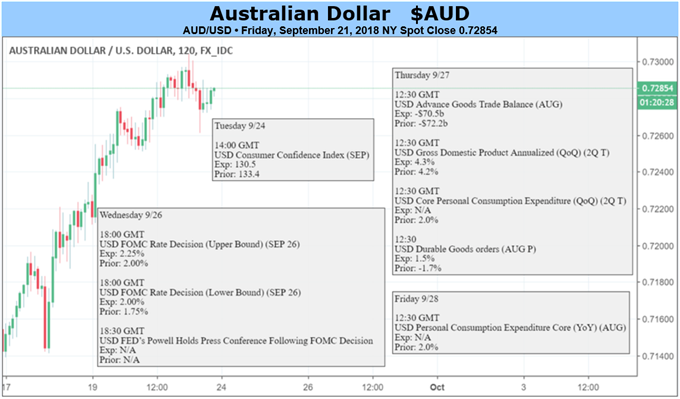 The Australian Dollar has risen to three-week highs against its big US brother, getting perhaps even more of a respite than I predicted this time last week.

This is perhaps surprising in an environment of terrible trade relations between Washington and Beijing. Australia has after all vast economic, political and/or security ties with both nations and can sometimes seem unfortunately sandwiched between the two. Rising tensions there don’t promise Australia any good.

However, some investors are clearly betting that events will stop short of a full-blown trade war, and that might be translating into a bit of current Aussie Dollar strength. They’ll also have seen recent strong Australian economic numbers, from overall Gross Domestic Product growth to employment levels.

That said the coming week may not offer Aussie bulls a lot more to charge at. The domestic economic data slate is very sparse and the approaching Federal Reserve monetary policy meeting may remind markets that the interest-rate gulf between the US and Australia continues to yawn in the US Dollar’s favor and probably will for some time.

For all the Aussie Dollar’s current vigor, Australian rates remain at record, 1.50% lows. They have been there since August 2016 and, according to rate futures market pricing, are expected to stay put for the rest of this year and all of next. The current ‘Fedwatch’ prognosis from the Chicago Mercantile Exchange puts the chance of a US interest rate rise this week at more than 90%.

The rate gulf has kept AUD under broad pressure for much of this year and, although that long downtrend line is now perhaps under threat, it is still in place.

Of course, the Australian Dollar is like all other currencies very much in thrall to global risk appetite and, if that holds up, it may well continue to gain. However, as there is no obvious data catalyst for this, and given that looming Fed meet, it’s a neutral call this week once again.