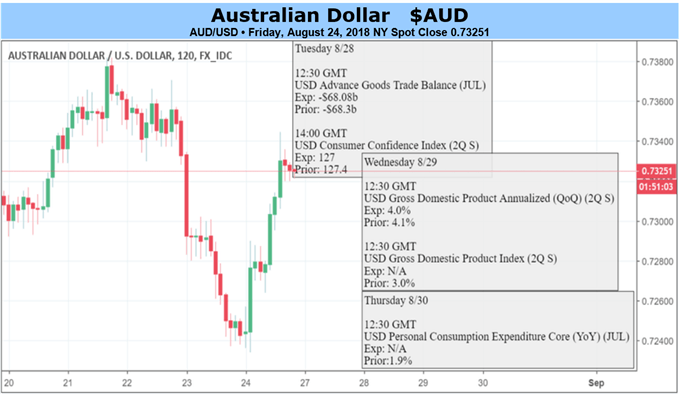 The Australian Dollar got a little boost at the end of the week as its home country got a new Prime Minister, but AUD/USD remains severely battered and, indeed, at lows not seen since the start of 2016.

Former Treasurer Scott Morrison has replaced Malcom Turnbull as leader of the Liberal Party which governs in coalition. Turnbull lost the confidence of his party so Morrison becomes Australia’s sixth Prime Minister since 2007.

Still, it’s notable that the rise in AUD/USD seen since doesn’t come close to the falls seen as the prospect of Turnbull’s ouster loomed larger last week. Australia’s political system is not exactly what you’d call dysfunctional but, all the same, the turnover rate at the top is worrying for markets. And it’s not as if they were free of Australian worries even without politics

Indeed the Australian Dollar is starting to look like a currency which just can’t catch a break.

It has been sliding all year against its big American brother as widening interest rate differentials in the US Dollar’s favor take their toll on a market where the Aussie had the upper hand for so long. Then came tariff wars and worries about Chinese growth levels, all grist to the Aussie-bearish mill given Australia’s huge raw material export links with China.

Add to all this stubbornly low domestic inflation and heavily indebted Australian consumers and it is little wonder that rate-futures markets do not see record-low interest rates going anywhere.

However, then things got worse. Last week saw a surprisingly dovish set of minutes from the last Reserve Bank of Australia monetary policy meeting. Morrison’s arrival as PM did only a little to row AUD/USD back upward.

The coming week won’t bring much in the way of economic data to move the gloomy conversation around the Australian Dollar on.

Of course, without further bad news, investors will no doubt decide at some point that the Australian Dollar has been kicked hard enough. But they seem unlikely to reach that conclusion this week, so it’s another bearish call.