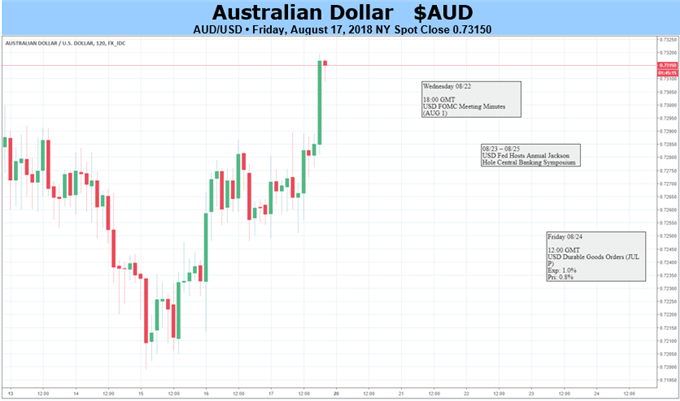 The widening interest rate differential in favor of the US Dollar does not appear to be going anywhere soon. Reserve Bank of Australia Governor Phillip Lowe testified before Parliament last week that, although the RBA still thinks the next move, when it comes, will be a rise, there’s no near-term case for any such move.

Indeed local futures markets do not now price in any change to the record-low, 1.50% Official Cash Rate until at least the start of 2020.

But the Aussie’s worries go a little deeper than simple rate comparisons. Risk aversion sparked first by global trade worries and then by thy collapse of the Turkish Lira has also weighed on the growth-linked currency. Morever, signs that the best of China’s growth for the year may now be behind us have also done it no favours. Official industrial production and capital investment data out of China missed forecasts significantly last week. They were also the first look at figures for July, and suggested that 2018’s second half may well be tougher than its first, with or without a trade settlement between Washington and Beijing.

So, given all of the above the Australian Dollar backdrop looks just about as gloomy as ever, especially as the markets also suspect that the RBA doesn’t mind its weakness at all given how often it talks about a weaker currency making growth and inflation goals easier to hit.

But the week doesn’t offer much in the way of Australian economic numbers. We will get the minutes of the last RBA monetary policy meeting. However, seeing as investors heard from the governor himself only a few days ago, scope for big moves on the minutes would seem very limited.

Make no mistake, the Australian Dollar is still biased lower against its US big brother, but it has been hit fairly hard in the last couple of weeks. The coming sessions could offer some breathing space and consolidation so it’s a neutral call.