AUD May Consolidate Again on RBA, RBNZ, US CPI and Trade War Risk 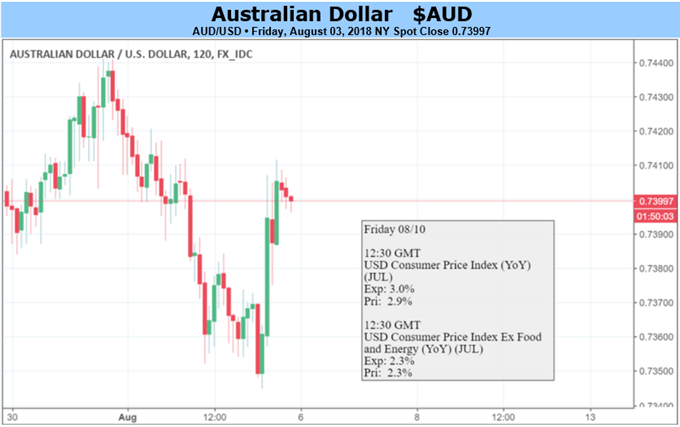 The Australian Dollar was heading towards a weaker week as a relatively less hawkish Bank of England rate decision boosted the US Dollar and AUD/USD fell as expected. It was looking like perhaps the Aussie could break out of its extraordinary consolidation since mid-June to the downside. Alas, Friday’s performance pared Thursday’s losses and now its oscillation enters its eight week.

Next week’s RBA monetary policy announcement seems unlikely to offer the Australian Dollar a meaningful reaction. At the moment, overnight index swaps aren’t pricing in a better-than-even chance (78.1%) of a rate hike until at least August 2019. Since the last rate decision, Australia saw solid jobs data but a mixed inflation report. This could pave the way for a status quo policy release. Perhaps Governor Philip Lowe’s speech afterwards on Wednesday could offer more.

What may even send the Australian Dollar actually higher lies across the Tasman Sea. Next week also has an RBNZ monetary policy announcement. A slightly more cautious central bank could send the New Zealand Dollar (a close alternative to AUD) lower. This is because since the last RBNZ rate announcement, New Zealand experienced poor inflation and employment data for the second quarter. Keep in mind that unlike the RBA, this central bank sees its next rate move as perhaps either a hike or a cut.

Lately, US economic news flow has been underperforming relative to economists’ expectations. The most recent example was last week’s mixed jobs report. There, wage growth remained unchanged at 2.7%. With headline inflation now running at 2.9%, it warns that real income gains have turned negative. Next week offers July’s US inflation data which could disappoint. On one hand, a downtick in CPI could hurt the US Dollar. On the other, negative real hourly earnings underpins the case for Fed rate hikes.

Finally, the risk of trade war escalation between the US and China overshadows equities and thus the sentiment-linked Australian Dollar. Last Friday, the world’s second largest economy said it would levy differentiated tariffs on about $60b US goods as soon as the latter implements measures. Meanwhile, Donald Trump’s Chief Economic Adviser Larry Kudlow said that they have more ammunition than China in a trade fight, hinting at potentially more provocation down the road.

Taking into account this information, the Australian Dollar fundamental forecast will change from bearish to neutral for the coming week. There may be a chance that AUD/USD remains range bound.