AUD May Head Lower on Fed, BoE and EU CPI. Can Consolidation End? 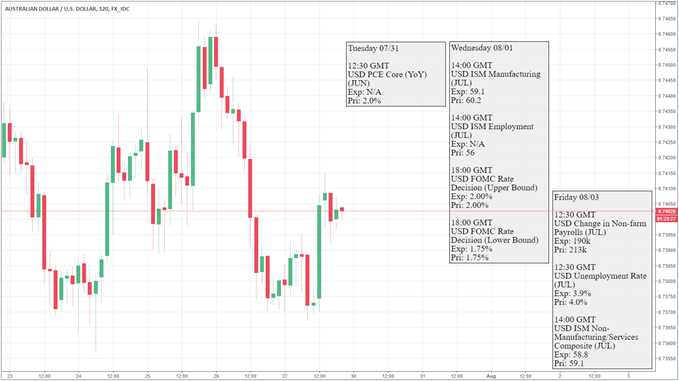 Have questions about the Australian Dollar outlook?Join a free Q&A webinar and have them answered!

The Australian Dollarfaced a week that was filled with event risk: local CPI, US GDP, the ECB and a trade meeting between Donald Trump and Jean-Claude-Juncker. By the end, the Aussie was lower as expected with most of the damage done from Australian CPI and Mario Draghi. However, AUD/USD’s consolidation since mid-June still holds. The week ahead again offers a plethora of catalysts that may offer a lasting response.

At this point, the Australian Dollar has over the past two weeks failed to find momentum, whether it be lower or higher, from key local event risk. Those being a solid jobs report and lower-than-expected headline inflation data. Both seem unlikely to alter the RBA’s current anticipated path for monetary policy, which may bring one hike in 2019. As such, next week’s trade balance and retail sales seem probably won’t to do much for AUD.

This turns the focus to external factors that may influence the US Dollar and sentiment. The former is an alternative high-yielding currency which faces the Fed’s preferred measure of inflation, a Fed rate decision and a jobs report in that order. Recent US economic data performance has been resulting in slightly lower than expected results, opening the door for more cautiously softer surprises.

This was adamant when the first estimate of second quarter US GDP data clocked in at an annualized pace of 4.1% versus 4.2% expected. The greenback headed lower, allowing the Aussie to capitalize on its weakness. However, more of the same ahead may not derail the Fed’s projected path of two more rate hikes this year, allowing the markets to eventually fully price that in. This could boost the greenback and send AUD lower.

Outside of the US, the Australian Dollar could be influenced by USD performance on the Bank of England rate decision ahead. The central bank is anticipated to raise rates to 0.75% from 0.50%. With the most recent UK CPI report underperforming, this may result in more patience from policymakers before another hike is upon us. Keep in mind the central bank will also release an inflation report.

Signs that we may not get another rate hike from the BoE soon could offer a lift to the US Dollar, sending AUD/USD lower. But there is more risk looking across the English Channel. Next week also offers aggregate Eurozone CPI data. Local economic news flow has also been tending to underperform relative to economists’ expectations, perhaps leaving the Euro vulnerable to weaker inflation figures.

With ECB President Mario Draghi offering relatively positive remarks on the state of inflation last week, disappointing results here could push some of those 2019 central bank rate hike bets further out. This would allow the Fed and the US Dollar to continue reaping the benefits of a rising yield advantage, paving the way for greenback gains at the cost of the similarly high-yielding Australian Dollar.

Last but not least, keep a close eye on stocks and more earnings data. The S&P 500 struggled pushing higher last week following disappointing quarterly reports from Facebook Inc. and Twitter. We will get earnings next week from major car companies like Toyota, Tesla and BMW whose outlook may still be clouded by the potential threat of US auto tariffs.

In regards to this front, there still remains some uncertainty here after the US/EU trade agreement. Commerce Secretary Wilbur Ross said that the conclusion on auto tariffs will come “in another month or so”. Until the road ahead clears, auto companies may express their concerns which may send shares lower. Taking into account this information, it will have to be another bearish fundamental forecast for the sentiment-linked Australian Dollar.