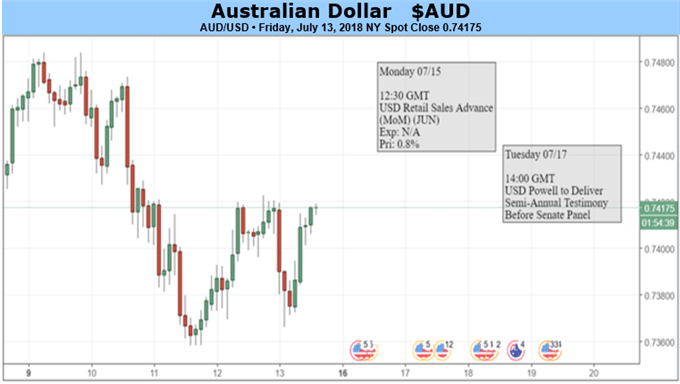 Australian Dollar Could Be Stuck Between RBA Minutes, Jobs Data

News that the US was considering yet more tariffs on Chinese goods sapped the global risk appetite from which currencies such as the Aussie usually benefit. However, while AUD/USD certainly slipped, it didnt fall very far and managed to rise again afterwards.

To be sure, the overall backdrop doesn’t obviously offer much for the bulls to charge at. For one thing, the interest-rate differential gap between Australia and the US seems set only to get wider. The Federal Reserve embarked down the monetary-tightening path long ago and remains on it. Meanwhile, the Reserve Bank of Australia has yet to take even a single step. What is more it’s not thought likely to for all of this year and next, according to rate-futures market pricing.

Moreover, while the Australian Dollar’s ability to weather tariff headlines seems to have improved a little, it could be rash to rely on this being the case permanently. It seems unlikely that such headlines are going to stop coming anytime soon.

Still, the market might be starting to feel that the Australian Dollar has suffered enough for now. The coming week will bring domestic economic data which are likely to highlight the paradox besetting its home economy. Thursday’s official employment numbers will probably continue to show robust job creation- an enduring economic bright spot.

However, they will come after Tuesday’s release of minutes from the RBA’s July 3 monetary policy meeting. They’re likely to highlight once again the central bank’s worries about persistently low inflation.

These two releases are likely to pull AUD/USD in opposite directions, albeit modestly. The pair has already settled back into an established trading range which was established in late June.

It’s quite hard to see this range breaking to the downside this week, and, absent a big and enduring risk-appetite revival, the top looks safe enough too. The Australian Dollar is still probably headed lower over the medium- to long-term, but this week I am going for a neutral call.