Australian Dollar Fall May Pause, If Only For Lack Of Data 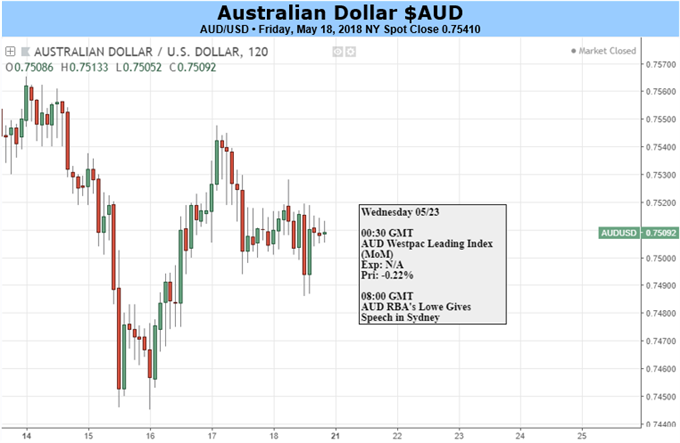 The Australian Dollar is stuck firmly in a downtrend against its big US brother, which has endured for much of this year. However, within that downtrend AUD/USD has settled into a broad trading range, which may endure through the coming week.

This is not to say that there is any particular reason for Aussie bulls to get excited.

No, they are likely to remain stuck with the same problems they’ve had all year. The Reserve Bank of Australia shows no inclination to raise interest rates from their record lows.

The domestic economy is doing quite well in some respects- employment rose ahead of expectations in last week’s official figures. But, inflation remains below target and the pass through from wages to general pricing seems achingly slow.

The situation still contrasts with a Federal Reserve still apparently keen to push rates up under new Chair Jerome Powell, and a market ever-more convinced of this pushing US Treasury yields higher.

But this week offers quite scant economic numbers, which may give the US Dollar’s apparently broad and relentless uptrend some pause.

Wednesday will bring monetary policy meeting minutes from both the RBA and the Fed, but there’s little reason to expect either central bank to have strayed from their well-known policy lines in meetings which both went as forecast.

Beyond those minutes, there’s a smattering of economic data, perhaps notably US durable goods order levels later in the week. These might see the US Dollar perk up a little if they come in strongly. But, overall, this week may well find AUD/USD bears in need of a pause for breath. A data lull might give it to them.

It’s a neutral call this week. But only just.