Sinking Australian Dollar Can’t Look For Support In The Numbers 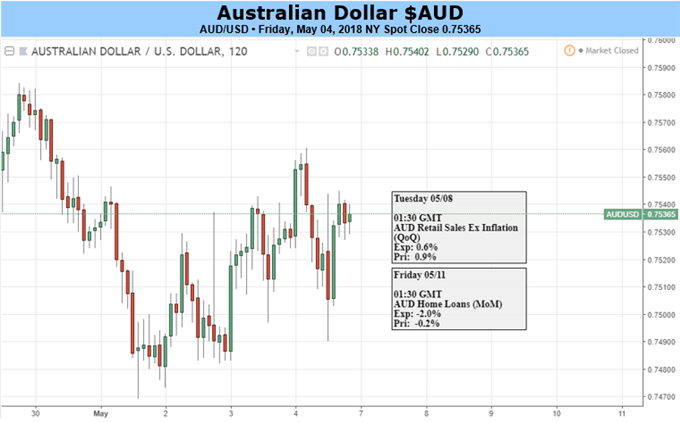 Join our analysts live for coverage of all major Australian economic data at the DailyFX Webinars. You’ll get plentiful trading tips there too.

The Australian Dollar will head into a new trading week in pretty much the same state it’s been in all year: under pressure against its big US brother.

AUD/USD has been stuck resolutely in a downtrend since the highs of January and the foundations of that downtrend are simply not going to be shaken in the coming seven days.

Interest-rate differentials lie at the heart of them. The US Federal Reserve is well into the process of raising its own rates from their post crisis lows. It declined to take matters further this month, but is widely expected to go again in June. The Reserve Bank of Australia by contrast is not expected to lift its own Official Cash Rate from its record, 1.50% low until mid-2019. And it’s already the longest unchanged rate in Australian history having been with us since August 2016.

Adding to this unashamedly Aussie-bearish backdrop is a sense that the RBA quite likes things this way. It still loses no chance to warn investors that a stronger currency would hit its ability to make its growth and inflation targets. When it left rates on hold this month it pointed out that AUD/USD remains above historic averages.

Australian inflation remains stubbornly below target. It came in at 1.9% annualized for the first quarter. That was exactly where it had been at the end of 2017 and still just below the RBA’s 2-3% target band.

Away from the interest-rate skirmish, the Australian economy is doing quite well on some measures. Its trade surplus came in very strongly according to the most recent data and employment continues to expand despite a long run of impressive gains. This week is full of economic snapshots, from business and consumer confidence surveys through to retail sales.

The trouble with all of them from the Aussie-bull’s perspective is that they are very unlikely to move the dial on interest-rate expectations. Therefore, they are unlikely to boost AUD/USD. So, another bearish call it has to be this week.