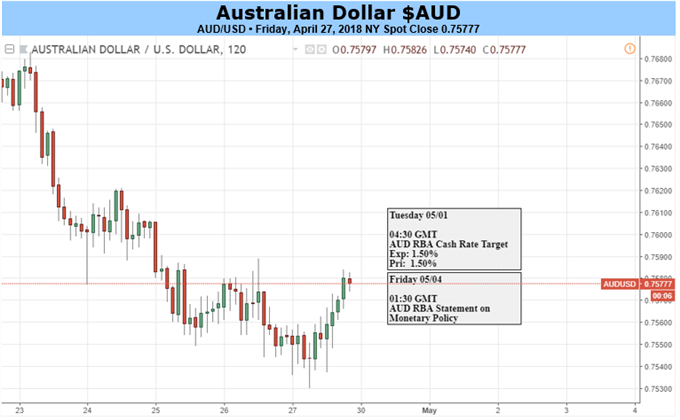 What makes some traders stand out from the crowd? Is there a secret ingredient? Find out in the DailyFX deep, deep dive into the Traits of Successful Traders

The coming week is likely to be a Tale of Two Central Banks for the Australian Dollar.

Monetary policy decisions are coming up from the Reserve Bank of Australia and the US Federal Reserve. If both go as forecast, they will probably only highlight the monetary-policy divergence which has so undermined the Australian Dollar this year.

The Fed is expected to remain in bullish mode, with the market now weighing whether we’ll have seen three or four interest rate rises by the time this year ends. It’s not expected to raise rates on Thursday, however.

The RBA will give its policy call earlier, on Tuesday. The Official Cash Rate is expected to remain at its 1.50% record low when it does. Indeed rate-futures markets don’t price-in any increase for this already elderly base rate until June, 2019.

And indeed the pricing weakness which the RBA often frets about when leaving rates alone was on display last week. Annualized first-quarter consumer price inflation remained stubbornly below the central bank’s 2-3% target despite market hopes that it would nudge back into that range.

AUD/USD has been declining now ever since it hit this year’s peaks, back in January. It’s fall accelerated last week as US Treasury yields rose to four-year highs, to the point where the Aussies’ climb from the lows of December 2017 to those January highs has been all-but completely retraced.

There is very little evidence that this weakness disturbs the RBA at all. Indeed, its regular public pronouncements against Aussie Dollar strength could lead one to believe that it is in fact quite satisfied with market action.

If the commentary around its monetary policy decision underlines that view, and the Fed still sounds optimistic, it is hard to see the Aussie rising next week.