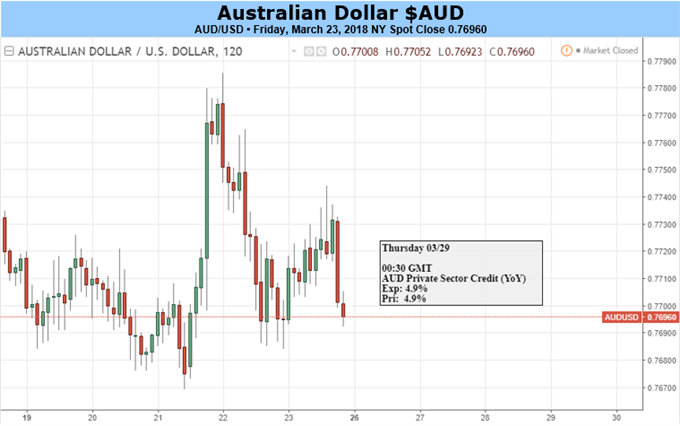 The Australian Dollar was in thrall to overseas events last week and, with very little of note on the domestic data schedule, this week looks set to offer more of the same.

Trade remains gloomily front and center. As a ‘risk asset’ geared to the global cycle, the Australian currency probably has as much to lose as any from any ratcheting-up of trade tensions. And they are ratcheting up. News last week that US President Donald Trump had signed off on US$50 billion of tariffs against China, and threatened more wide ranging trade barriers, was not good news for Aussie bulls.

Indeed, coupled with lower world prices for the raw materials which make up so much of Australia’s exports, tariff worries saw AUD/USD slide last Thursday.

All countries and regions threatened by higher US trade barriers are now considering their options and it seems as though diplomacy and compromise of an order apparently in short supply will be needed to avoid outright trade war. Against this international backdrop it’s hard to see the Australian Dollar making headway. At the very least it will remain hostage to trade headlines.

Domestically the currency still wrestles with a central bank in no clear rush to lift its key Official Cash Rate from its record, 1.50% low, even as US interest-rate rises savage Australia’s long-held yield advantage. Job creation also missed expectations last month and, although it remains reasonably robust, fears about it sustainability have been stoked.

To pile on the worries, at least for bulls the technical picture is darkening too. DailyFX Senior Currency Strategist Ilya Spivak notes that AUD/USD is now being pressured down towards a key support trend which has led the pair higher quite consistently for two years past. Fundamentally the Australian economy is not performing at all badly, but still it’s hard to get too excited about its currency given all of the above.

So It’s a bearish call this week, with at least one eye on the international news flow.