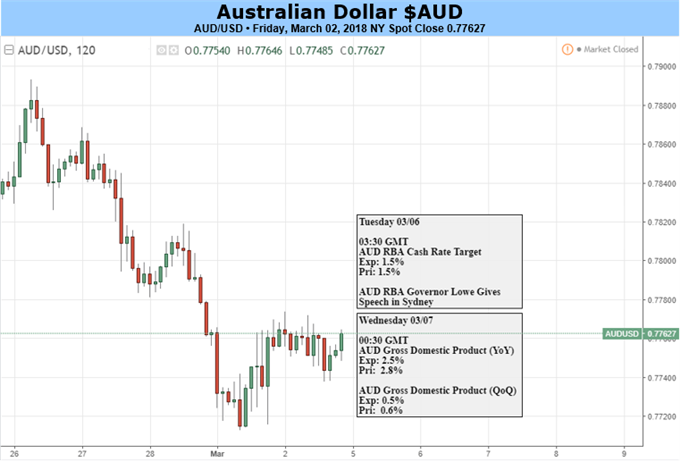 What do retail foreign exchange traders make of the Australian Dollar’s chances right now? Find out on the DailyFX Sentiment Page.

The Australian Dollar remains stuck in a downtrend against its US cousin but probably remains far closer to three-year highs than its domestic authorities will like.

We’ll hear from those authorities in full measure in the coming week. Indeed, the Reserve Bank of Australia will give its March monetary policy call on Tuesday. No change to the record-low, 1.50% Official Cash Rate is expected. Indeed, rate-futures markets don’t fully price even a modest, 25 basis point increase in that until the start of next year. But the markets will probably get some sort of statement from which to gauge the RBA’s current world view.

They will also hear from RBA Governor Philip Lowe. He’s been rather absent from the commentary front-line this year but will be making a speech in Sydney the day after. He can expect a virtual crowd.

These events come at an interesting time for the Australian Dollar. Weaker local inflation numbers and worries about the perennially indebted local consumer have conspired to push out rate-hike expectations and raise the odd storm cloud over a national economy which, by most definitions, is still performing well.

These clouds, and the clearly bullish prognosis for US interest rates, have seen AUD/USD retreat. Now the Australian authorities are often wary about trying to talk their currency lower in the face of general US Dollar weakness. They’ve learned the hard way before that this doesn’t work.

But they may well reason that they can get a lot more bang for their rhetorical buck when the US Dollar is looking a bit more perky, as it is at the moment. On that basis, we might expect the RBA to increase the firepower of its now-customary rhetoric, warning that too much Aussie Dollar strength is bad news for both its inflation target and general economic growth.

Much will of course depend on what goes on in the broader foreign exchange market this week, especially in the United States where President Donald Trump last week announced higher tariffs on imported industrial metals. This in turn has reignited worries that the world is heading away from free trade and towards more protectionist norms- not good news for the growth-linked Aussie.

If the RBA does dial up the worries about currency strength, next week could well see AUD/USD headed lower still.