Australian Dollar Can’t Hope For Much From RBA Policy Call 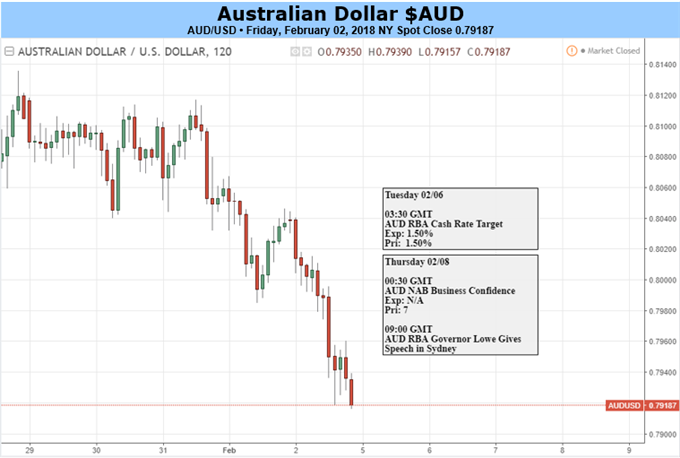 Is there a secret ingredient? Why are some traders so much more successful than the rest? Take a look at the DailyFX deep dive into the Traits of Successful Traders.

The Australian Dollar has been driven like most currencies by the US Dollar for much of this year but this might just be the week when that changes and domestic matters take the helm- at least for a while.

The Reserve Bank of Australia will give its first monetary policy decision of 2018 on Tuesday. Now, the chances of any change to the record-low 1.50% Official Cash Rate this time around are minimal, to put it mildly. Indeed, the-rate expectations indicator from Australian index provider ASX prices the probability of unchanged policy at 100%. That said markets are reasonably sure that, when the RBA does move, it will be to increase interest rates, probably towards the end of this year.

With all of that in mind the markets will still be grateful for any windows the RBA may care to open into its current thinking, perhaps especially as regards the Australian Dollar. The central bank has been quiet this year so far even as its currency remains extremely elevated against the beleaguered greenback. AUD/USD has inched down this week but is still close to last August’s highs –peaks which had not previously been scaled since early 2015.

The RBA has been known to rail against such displays of strength from the Aussie. However, it is also acutely aware of the limitations of trying to jawbone a currency lower in the face of a broadly-weaker US Dollar. How it balances these two concerns will be of great interest to the markets.

Inflation remains as mystifyingly subdued in Australia as it does in many other developed economies where strong, tightening labor markets strongly suggest that it ought to be higher.

Assuming no particularly overt sermonizing about the Australian Dollar’s level, the RBA’s inflation view will probably be the market mover on policy day. Consumer prices’ latest rise was only a whisker below the RBA’s 2% target level, leaving the RBA quite a lot of leeway in taking a view. Policymakers well know that too much fretting about inflation at this point will only support the Aussie further by making the market more firmly price in higher rates.

It also has three months’ grace before the next official inflation numbers are released, so may be cautious about the outlook for prices, putting the emphasis on a need for more data. Assuming that it is then the Australian Dollar may not rise much this week, even if there’s no clear reason for it to fall either.

So it’s a neutral call this week.