Australian Dollar Could Give Ground if US Data Prompt Rethink 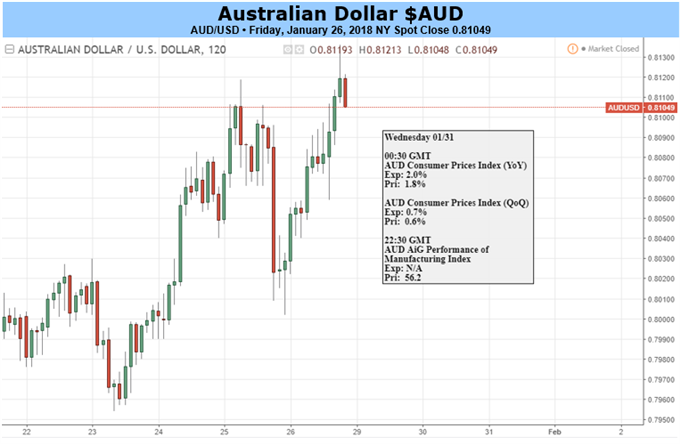 The Australian Dollar ended last week rather a prisoner of US Administration rhetoric concerning the appropriate level for the greenback – it was not alone in this of course.

Treasury Secretary Steven Mnuchin sent the US Dollar plummeting on Thursday when he opined that a weaker currency would be good for “trade and opportunities.” AUD/USD joined in fully, rising to highs not seen for 32 months in the aftermath. However, there has since been a rowing back from any idea that the Trump Presidency actually backs a weaker Dollar in the long term.

The President himself said in Davos that the Dollar was going to get stronger and that, “ultimately,” he wanted to see that happen. Spotters of devils in detail may assign some importance to that use of ‘ultimately,’ not unreasonably believing that it leaves plenty of room for tolerance of a weaker Dollar in the short term. However, the markets seem to have taken Trump’s comments as an attempt to give context to those of Mnuchin and the US Dollar has inched back up.

The coming week will probably see the US Dollar continue firmly in the AUD/USD driving seat, even though key economic data are due from both Canberra and Washington. The US Federal Reserve will announce its monetary policy decision on Thursday. No change to the settings is expected which will as ever put focus on rate-setters prognoses for the coming year.

Friday will bring what’s arguably still the single most important piece of world economic news, official US labour-market statistics. A rise of 165,000 non-farm jobs is expected for December. Now, assuming that the numbers don’t disappoint and that the Fed sticks to its script and leaves markets expecting three more interest rate rises this year, then the US Dollar could recover some lost ground.

The US remains the most obviously aggressive central bank in terms of likely monetary tightening. Many investors seem to have lost sight of that, not least when it comes to the Australian Dollar –Australian interest rates remain firmly at record lows and are not expected to rise until the end of this year at the earliest. To the extent that the US economic schedule this week could provide them with a little reminder, there could be some US Dollar upside, assuming of course that the Trump Administration steers clear of weak-Dollar commentary.

Closer to home investors can expect a look at official Australian consumer price data for the final quarter of last year. Monthly surveys already released suggest that there could be a modest uptick from the third quarter’s 1.8% rate, and of course unexpected strength here could buoy the Aussie. Chinese Purchasing Managers Index numbers are coming too, and they can have a strong if often short-lived effect on AUD/USD trade.

However, on balance, and should all the numbers keep close to forecasts, then the US Dollar could see a bit of a broad rethink which would see AUD/USD lower by week’s end, if not necessarily by very much.