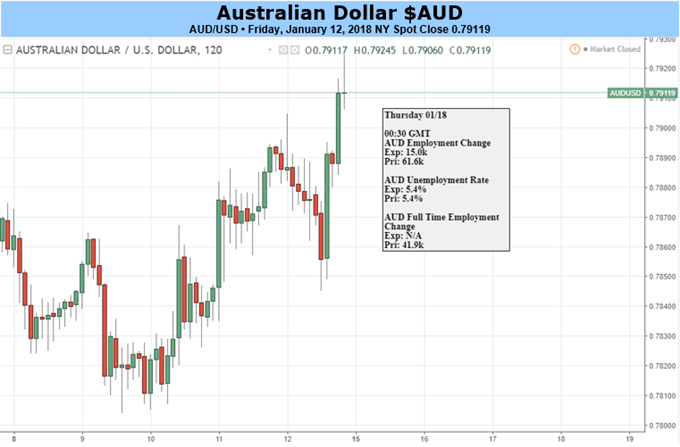 Join one of our analysts to trade all the major Australian economic data, live and interactive, at the DailyFX Webinars.

The Australian Dollar moved modestly higher last week, in the process extending the eye-catching bull run against its US rival which began back in early December. That run has now taken it to highs not seen since last October.

The Aussie’s support has been quite broad-based too. General US Dollar weakness has certainly helped. Global investors increasingly suspect that the US won’t be alone in tightening monetary policy this year and this suspicion has seen many currencies rise against the greenback. The Euro is notable in this regard, but the Australian Dollar has at least caught a tailwind. It has had some domestic help, too. News of blockbuster Australian retail sales raised hopes that the Australian consumer –often absent from the economic party- might be about to step up.

And the domestic front may continue to dominate Australian Dollar trade as we go through the coming week. There are two especially notable pieces of economic data due from Australia as it proceeds. The most important will probably be Thursday’s official employment figures for December. The previous month’s data saw a rise of more than 61,000 jobs. This not only crushed expectations –which had centered on a rise of just 19,000- it also formed the biggest monthly gain for more than two years.

Now this is a quite volatile series, especially in terms of the split between full- and part-time work, and it may be asking far too much to expect another storming month. However, Australia’s unemployment rate crept lower quite reliably thorough 2017. It started close to 6% and has nor retreated to 5.4%. Ongoing incremental improvement here will probably support the Aussie, even if headline job creation is likely to have a more immediate market impact.

The other piece of key data will shed light on consumer inflation expectations. These will be released just before the labour-market numbers, so Thursday could be a banner day for AUD/USD trade.

Consumer Price Index inflation has in fact been below the Reserve Bank of Australia’s 2% target for most of the time since late 2014, with the exception of the first quarter of 2017. Back then it rose just above the line. Subdued price pressures have been a key reason for perceptions that the RBA is reluctant to raise the Official Cash Rate from its 1.5% record low. Inflation expectations remained at 3.7% in December. A rise next week would probably be seen as supportive of the Aussie, although no-change could be too, given the price rises currently implied.

The week won’t all be about domestic numbers, however. Investors will get a look at China’s official growth data for the old year’s last quarter. Believe it or not that’s coming up on Thursday too! Beijing’s target for the year was 6.5% or better (a 6.5% print would be a new 27-year low). However, there has been some optimism expressed that growth might be a little stronger than that, and if it is the Aussie should benefit.

All up there could be some upside risk in the domestic data this week, especially for AUD/USD. So it’s a cautiously bullish call from me, albeit one mindful of the considerable gains already booked. One thing to watch, however, could be the fact that AUD/USD is edging up toward levels at which the RBA in the past has been minded to comment on it being too strong.

On past evidence it seems unlikely to remark again for as long as that strength stems from general US Dollar weakness. However, the possibility of verbal intervention remains one to watch.