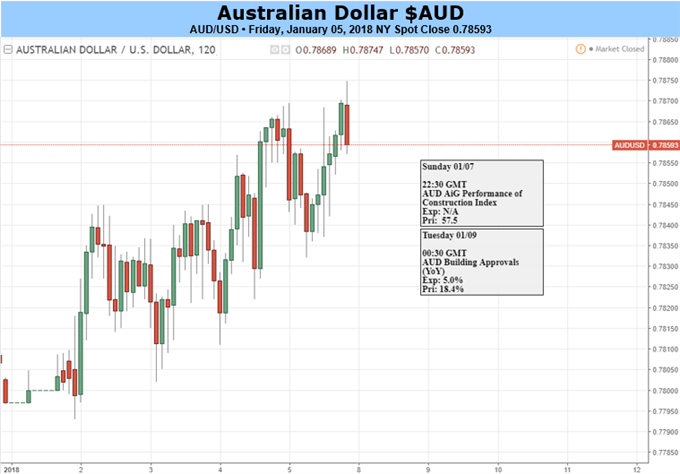 The Australian Dollar has rallied especially strongly against its generally beleaguered US counterpart in the past three weeks and it’s not easy to see why that should be.

The most obvious monetary and fiscal factors seem to favour the greenback. After all Congress has passed the most sweeping tax reform seen for decades. Then there’s the Federal Reserve. It expects to raise interest rates three times in 2018 and a fourth increase is hardly unlikely should the economy continue to rev. The Reserve Bank of Australia by contrast is not expected to increase its own, record-low Official Cash Rate from 1.50% in the coming twelve months.

If these prospects play out, then the US Dollar will have a clear yield advantage over the Aussie for the first time in almost twenty years. Then there’s the RBA itself. It clearly doesn’t want to see its currency much stronger. Indeed, it still barely loses a chance to warn that a higher Australian Dollar makes its inflation target harder to hit and could weigh on growth.

So why is the Aussie lording it over the greenback and can it continue to? Well, much of this is a global US Dollar weakness story. The US Dollar has been the victim of suspicions that other parts of the developed economy may see tighter monetary policy than was thought, notably the Eurozone where recovery seems to continue apace. There have also been some doubts expressed as to whether the Fed will really be as hawkish this year as it has been in recent months.

There’ve been, more local other supportive factors too. Commodities have had an excellent run and Australia is one of their largest exporters. The Bloomberg Commodity Index has been on a tear since the Fed last raised interest rates. Can this last in an environment where China’s growth is expected to slow this year? Well, maybe.

However, the overall Australian economic picture remains mixed. Employment levels are strong but wage settlements remain weak. Business confidence has wilted worryingly while consumer sentiment has forged ahead. Last Friday investors discovered to their surprise that the country’s trade balance had slipped into heavy deficit for the first time in over a year. That figure will weigh on the final quarter’s overall growth.

However, AUD/USD’s gains have already been impressive and the pair now stands very close to the sort of levels which has moved the RBA to inveigh against its strength in the past. The week’s economic data menu is firmly biased towards US data. If they hold up we could see at least some rethinking of the Dollar-weakness story as global trading desks fill up again after the holiday break. AUD/USD need not collapse all the way back to the lows of early December, of course. But it may not move ahead with its former confidence either.

It's a neutral call this week.