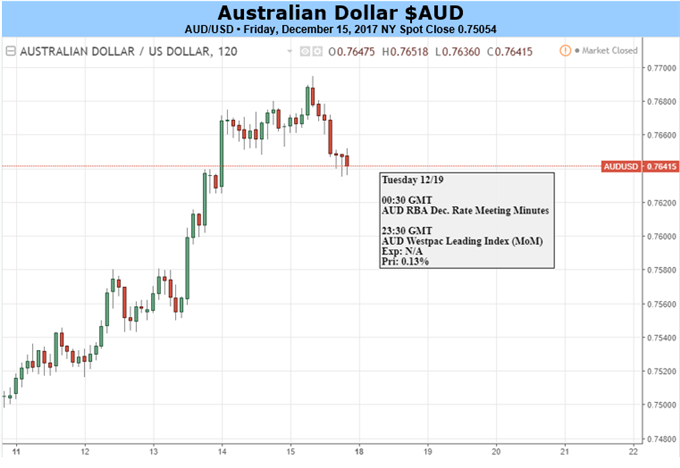 The Australian Dollar was borne aloft last week by updrafts foreign and domestic.

It was helped by the general US Dollar weakness which followed Wednesday’s monetary policy call from the Federal Reserve. While the Fed was far from dovish, it did stick with its central prescription of three interest rate hikes in 2018. Rightly or wrongly there were clearly those who wanted to hear of more and the greenback struggled when they didn’t.

But that wasn’t the Aussie Dollar’s only prop. Australian data came charging home in very sprightly fashion too. Consumer confidence hit four-year highs according to a monthly snapshot from major lender Westpac. Then came news that the Australian economy added more than 61,000 jobs in November, blowing expectations for an already chunky 19,000 clean away. This was the strongest monthly showing since October 2015, with full-time employment growing encouragingly.

Given all of the above, it’s no wonder that the Aussie rose.

But what of the coming week? Well, it will contain the last trading sessions before markets head into the Christmas break. This could make for thinner trading and exaggerated moves. It may also be that investors will rethink that immediate Fed reaction, re-learn the clear fact that the US central bank remains the most hawkish developed-market monetary authority by a country mile and buy the Dollar back a bit.

It’s certainly much more hawkish than the Reserve Bank of Australia.

Don’t forget that that last US rate hike finally eroded the Australian Dollar’s long-held yield advantage over the greenback, putting the upper limit of the Fed funds target band at 1.50%- the same as Australia’s record-low official cash rate. The Fed may only be set to hike rates three times in the coming year, but that’s still three more times than the RBA will do so, according to current futures-market pricing.

The USD side of AUD/USD is all too likely to dominate but much may depend on the week’s most significant Australian news release, the RBA’s policy meeting minutes from December 5. In recent pronouncements the central bank has seemed a bit less worried about inflation’s weakness and a bit less inclined to worry aloud about the baleful effects of Australian Dollar strength on its inflation-targeting mandate.

To be sure it still mentions both, but not with the urgency it once did. If the minutes show it in similarly relaxed frame of mind about both, the Australian Dollar could score some more gains, but overall a more neutral tone is probably likely for AUD/USD.