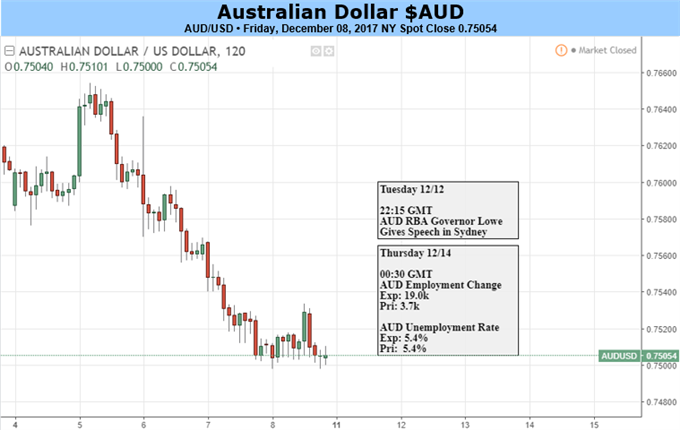 Is there a secret ingredient? What makes a great trader? Check out the DailyFX deep dive into the Traits of Successful Traders

At face value the coming week doesn’t look set to offer the Australian Dollar a lot of support.

There’s a dearth of economic data in any case, with very little indeed due from the currency’s home country. So by the time we get to Friday we’re not likely to know very much about Australia’s performance that we don’t know now.

Of course there’s also the US Federal Reserve’s final monetary policy meeting of the year. The result of that will hit the local newswires early Thursday morning in Asia Pacific. And here again things don’t look good for Aussie bulls. If the Fed does as just about everyone expects then it will raise the Federal funds target rate by a quarter percentage point, to 1.50%. Then it will at long last match the record-low Australian official cash rate and the Aussie dollar’s long-held, post-crisis yield advantage over the greenback will be toast.

Of course this prospect has been just about the best-flagged one in the financial world for months now, so it’s very unlikely that the fact of that rate hike will move AUD/USD very far one way or the other. What probably will, however, is the Fed’s take on how many more rate increases there might be in 2018. This will also be their de facto take on how far the US Dollar will stretch into the realm of yield advantage over the Aussie. After all, rate-futures markets are still reasonably certain that the OCR will still be at 1.50% when we get to New Year’s Eve, 2018.

At present the Fed expects to make three rate increases through the coming year, in addition to December’s. However, there are commentators who think there may yet be more than that. So, all up it’s pretty clear that the Australian Dollar is going to face a bit of pressure. It may get some respite, however, if the Fed evinces more worry about the US economy, and especially about its capacity to produce sustained inflation, than the markets now expect.

The week isn’t quite all about the Fed though. Reserve Bank of Australia Governor Philip Lowe will speak in Sydney on Wednesday. RBA speeches used to be fairly reliable Aussie-weakeners as the central bank usually lost no chance to warn markets of the harmful consequences of too much currency strength. In reality Lowe’s talk could now go either way. If he’s resolutely dovish, and perhaps repeats the RBA’s recent line that rate rises elsewhere place it under no pressure to follow, then AUD/USD could well struggle.

However, if he’s a little more bullish on domestic inflation’s prospects, then the local currency could get a little support.

That said it seems as though the Australian Dollar will have its work cut out to rise far this week so it’s a bearish call, albeit a cautious one.

This long downtrend will take some breaking. It’s unlikely to snap in the week ahead.