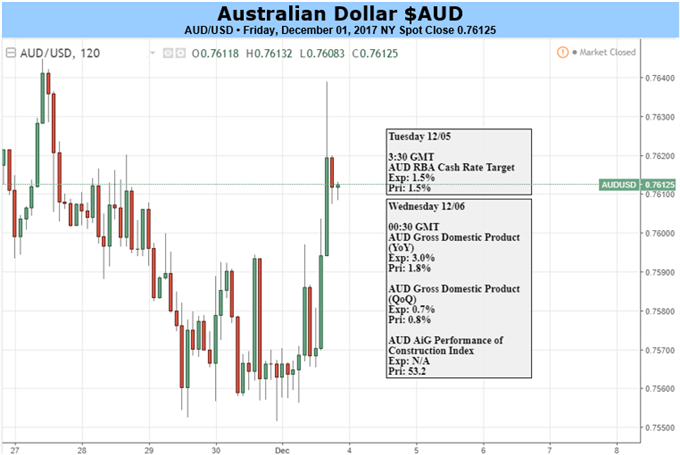 New to AUD/USD? Our beginners’ guide is here to help

Things don’t look great for the Australian Dollar, especially against its big US cousin.

AUD/USD has been sliding consistently from the year’s highs and that broad downtrend remains very much in play. Relative interest-rate prognoses are doing much of the damage. The US Federal Reserve is expected to raise its own rates again this month and, should it do so, it will be a significant moment not just for the US Dollar but for the Aussie too. 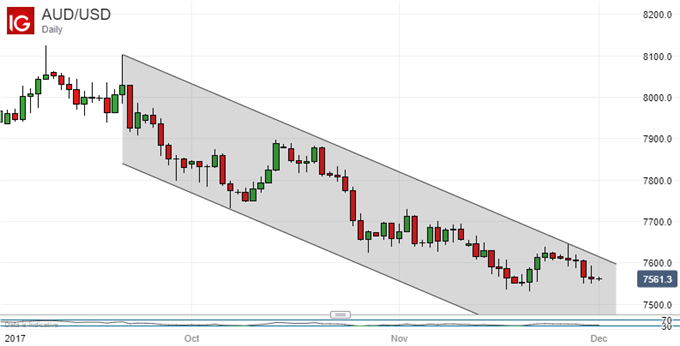 One more quarter-point increase in the Fed funds target rate would take it to parity with Australia’s 1.50% Official Cash Rate. The Australian Dollar’s yield advantage would then be gone for the first time since the financial crisis. There’s more bad news for Aussie bulls. While the Fed is expected to keep on raising interest rates through 2018, futures markets suggest that the Reserve Bank of Australia is thought unlikely to lift the OCR until the following year. This is pullback from the position only a few weeks back when a single rise was priced in.

A series of weak retail and inflation reports cast doubt on that, even as the Australian economy continues to do quite well by some yardsticks, notably that of employment.

This week will see two key domestic events for the Aussie. The first of these will be the RBA’s final monetary policy call of the year. There is just about no chance that rates will change, but the extent to which the RBA appears to endorse current market pricing will be very interesting. Even if it says nothing at all on the subject, that may well be taken as a sign that current, distant rate-hike expectations are just about right in its view, with more Aussie weakness the probable result.

Wednesday will see official Gross Domestic Product figures for the third quarter. The second was reasonably strong with a 0.8% improvement from the first and a 1.8% annualised gain. The immediate aftermath of the figures is likely to see quite binary AUD/USD trading, with the Aussie rising on strength and falling on any weakness. The longer-term reaction will be more nuanced. Ongoing strength in exports will be welcome, but it will take stronger signs of internal consumer demand to shift the dial on likely interest-rate timing. So, watch for those details.

All up, this doesn’t look like a week in which the essential, underlying AUD/USD trend is going to change. But there may be sufficient news to merit at least a pause while investors think about it. It’s a cautiously neutral call this time.