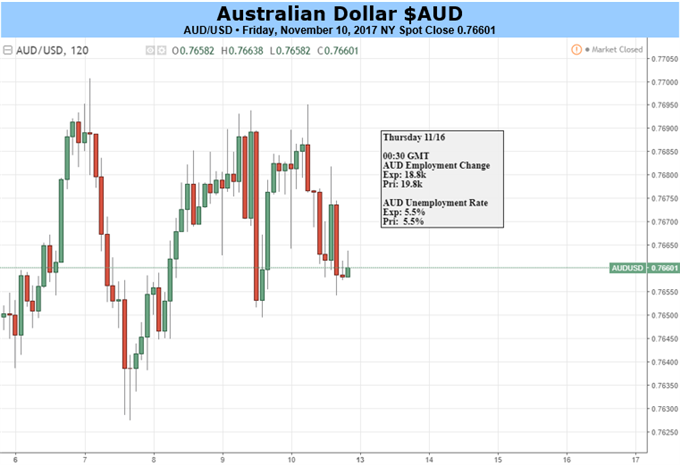 Australian Dollar Looks Stuck But May Yet Break Its Downtrend

Australian Dollar bulls are getting some help from the US as a new week gets under way.

Last week brought news that keenly-awaited US corporate tax cuts won’t now be coming until 2019 at the earliest. That gave the greenback a general knock – not least against the Aussie. Weekly jobless-claim data didn’t help either – although the surprise gain there came from multi-decade lows the week before.

Still, that help came in handy because the Reserve Bank of Australia certainly didn’t do a lot for its currency. It left interest rates alone at record lows and, again, seemed in no hurry whatever to raise them. That impression was only bolstered by the subsequent release of its regular Monetary Policy Statement in which the RBA worried (yet again) about the effects of too strong a local currency on both growth prospects and its inflation mandate.

All up last week’s trade saw AUD/USD going nowhere much, although its retreat from 2017’s highs has palpably slowed, with range trading taking its place. The coming week is very likely to see continuation of this theme. The big domestic event will be Australia’s official employment report which is coming up on Thursday. There’s scope for the Aussie to gain if this manages to come in strongly, but probably not enough to see the AUD/USD trading dial move significantly

We know from last week’s RBA statement that slow income growth continues to dog the Australian consumer even at current, relatively strong employment levels. And unless strong employment puts upward pressure on consumption and prices then its monetary implications are limited.

The Australian Dollar seems set to remain broadly rangebound in the coming sessions, with the US economic story probably more likely to drive events in AUD/USD. From the more technical side it is worth noting that even a continuation of the current range would mean a break of the persistent downside channel in place since September 20. 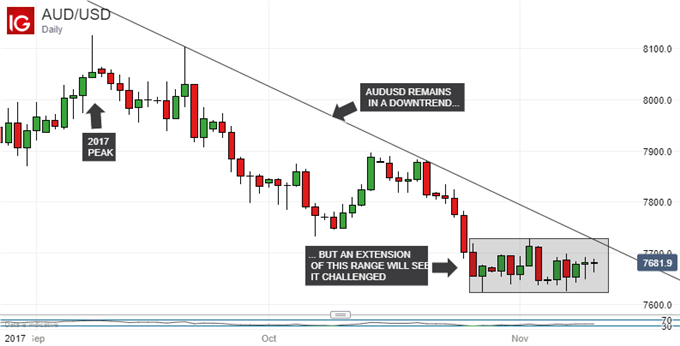 Conventional wisdom would suggest that the prevalent downtrend will resume once the current consolidation phase is over, but that phase will probably last the coming week.