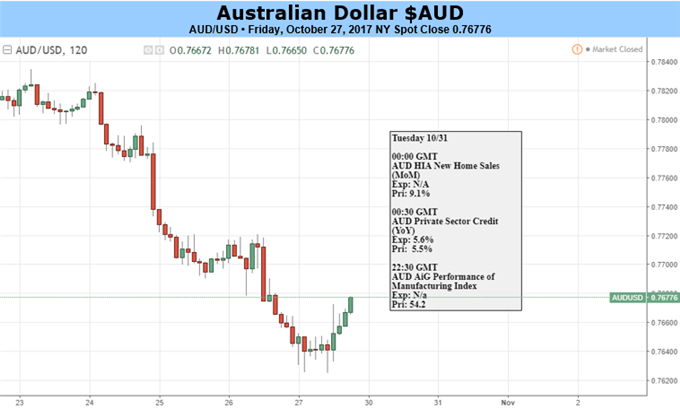 Australian Dollar Pressured But May Have Suffered Enough

The third-quarter’s Consumer Price Index rose by 0.6% compared to the second’s, and by 1.8% on the year. Forecasters had expected respective gains of 0.8% and 2%. Now it’s possible that the current quarter’s numbers will be lacklustre too. They’ll be released following a review of the methodology which is used to calculate the data. This regular process tends to lower readings. All up it looks as if Australian inflation is heading towards year-end in rather shaky fashion.

Moreover, last week’s shock arrived as the Australian Dollar was weakening anyway. Market perceptions that the Reserve Bank of Australia is in no hurry to lift the Official Cash Rate from its 1.50% record low have grownin the last couple of weeks. And the RBA itself loses few chances to talk the currency down. This doesn’t look like a very constructive backdrop for the Australian Dollar against the greenback or, indeed, pretty much any other currency you like.

The coming week offers few obvious opportunities for the Aussie to get out of jail. The US Federal Reserve’s November monetary policy meeting will give its dispensation on Thursday and that will of course be the global market highlight.

That said confirmation that the Fed remains on course to raise interest rates in December can hardly be expected to support the US Dollar much more. This prospect has been live for months and must surely be priced in. All may hinge on how hawkish the central bank is held to be beyond the end of this year. Any hesitancy could see AUD/USD firm.

There is also a plethora of Australian and Chinese economic data in the week ahead which may yet lend some support should they come in as expected. The manufacturing and service sectors of both countries will be in the spotlight with the release of Purchasing Managers Indexes- or their equivalents.

For sure the Australian Dollar remains under a degree of downside pressure but there’s some chance that this is a little overdone relative to its home country’s overall economic performance. This performance is far from shabby even if wages, consumption and inflation are lagging it. While acknowledging that pressure, it might not be too much of a surprise to see the Aussie gain in the coming week. 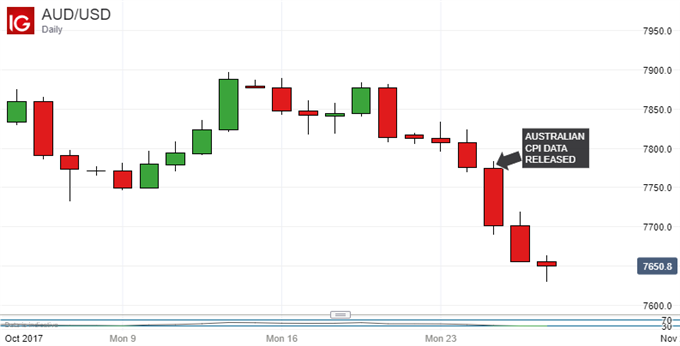