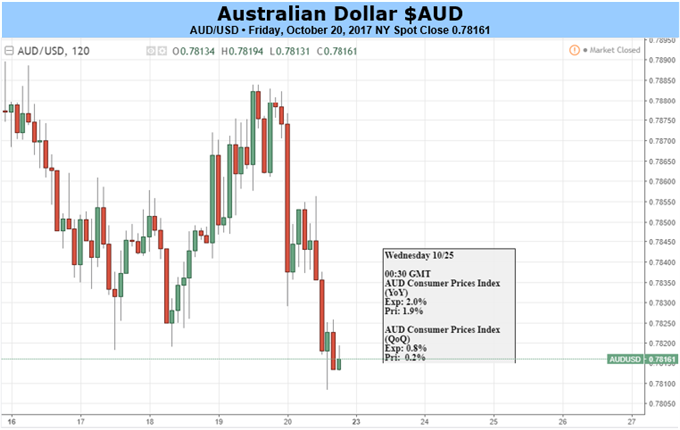 The year’s last quarter is under way. What will it hold? The DailyFX technical and fundamental forecasts are out.

The Australian Dollar faced both headwinds and tailwinds last week.

The most crucial economic number out of its home country came in the form of September’s official employment figures. They came on strong, very strong. Job creation exceeded forecasts (showing some enduring vigour after a powerful August surge), while the unemployment rate edged down when it had been expected to hold steady.

So far so good for Aussie bulls. Things seemed to get better when an avalanche of Chinese data also looked robust, with official growth figures matching forecasts while industrial production and retail sales exceeded them. Australian stocks have also played their part, breaking up at last through the top of a narrow trading range in place since May.

However, these bullish factors came against the release of minutes from the Reserve Bank of Australia’s last monetary policy meeting. And they made less-comfortable reading. The central bank again warned about the effects of too much currency strength on its ability to target inflation but also on growth prospects. It also said that interest-rate rises elsewhere would have no “mechanical link” to similar action in Australia. In other words, “the Federal Reserve can do what it likes, but if Aussie data don’t permit it, we won’t be following.”

In the end the RBA is in a tough spot. It doesn’t want to add to the Australian Dollar’s already considerable international allure by proffering interest rate rises, but the Australian economy is doing at least reasonably well and so it cannot reasonably deny that if rates do move, that move will be upward. This leaves AUD/USD in a bit of a spot too. Investors might like to chase it up but they can be reasonably sure that to do so too hard from current levels is to risk incurring the verbal wrath of the RBA.

That probably leaves RBA stuck for the moment, perhaps in thrall to US developments. Australian consumer price index numbers due on Wednesday will be the probable scheduled Aussie Dollar highlight of the coming week. Strength here is likely to keep the “next move will be up” theory of interest rates very much alive. But it would have to be quite marked to bring the perceived timing any closer than it is now, with futures markets pricing in a gain toward the end of next year.

So, given all of the above, it’s a neutral call this week.