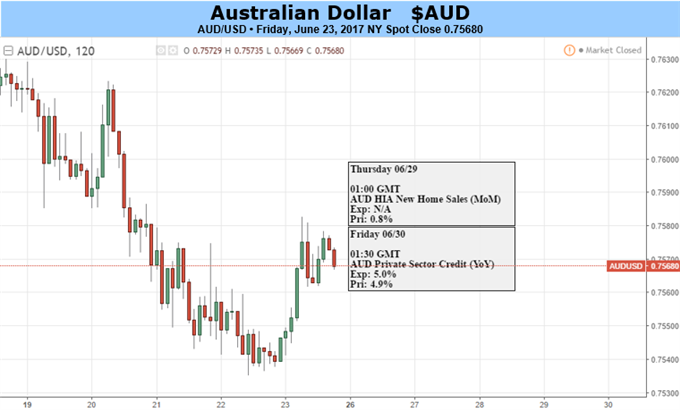 Australian Dollar May Find Path Of Least Resistance Leads It Down

The Australian Dollar struggled a little bit against its US big brother last week but closed out Friday not so very far away from where it had begun on Monday.

The Aussie came under more pressure against its commodity-currency peers, which probably didn’t help AUD/USD’s fortunes. Rightly or wrongly investors now see the central banks of both Canada and New Zealand as less dovish on monetary policy than the Reserve bank of Australia. New Zealand’s left interest rates alone at record lows last week, but issued a statement which markets thought was a bit more hawkish than its processor. As for Canada, well, retail sales numbers came in strongly leading investors to suspect that higher rates may not be as far off as they were.

By contrast the latest policy-meeting minutes from the Reserve Bank of Australia showed rate-setters minded to keep record-low interest rates very much where they are.

Whether this picture is strictly accurate, and whether any of these central banks are close to raising interest rates is debateable but, for the moment, beside the point. Weaker oil prices aren’t helping the broader commodity complex either and, with Australia a key raw material producer, they’ve also weighed on AUD/USD. This then is the hefty baggage which the Australian Dollar will drag into a new week which is rather short of key Australian economic news.

That said, investors know that the RBA is keenly watching the local housing market. It tells them so often they could hardly fail to. They will get a bit of light on that subject Thursday when the Housing Industry Association’s home-sales snapshot for May is released. If strong that might send AUD/USD higher, as might Friday’s look at private sector credit.

However, those two data points aside, AUD/USD will be in thrall to more-plentiful US numbers which, if they come in as expected, should keep the pair under a bit of fundamental pressure. Keep a close eye on the oil price as well as the economic numbers, but assuming no major turnaround in crude’s fortunes it’s a bearish call this week. 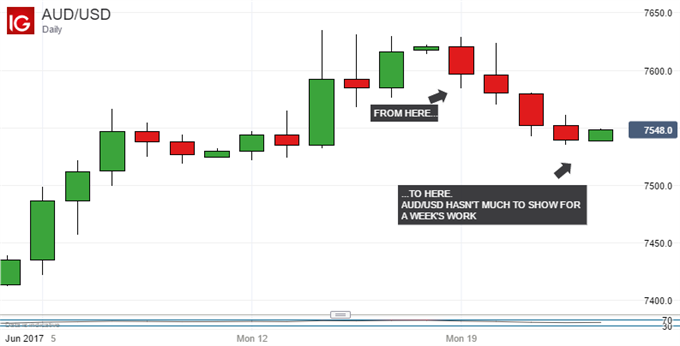