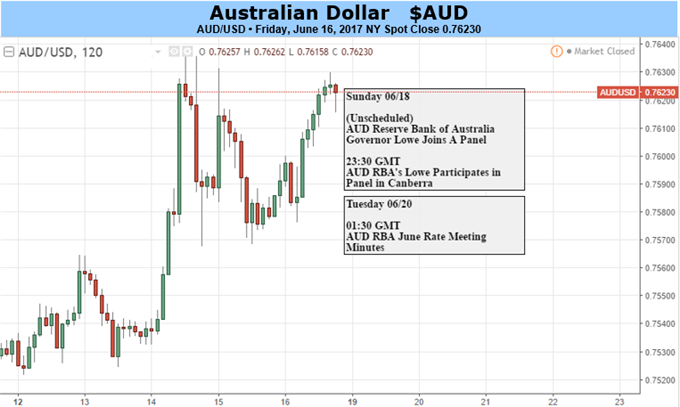 Australian Dollar May Find Itself Short Of Further Impetus

The Australian Dollar reaped the benefits of foreign and domestic data surprises which went its way last week.

The tone was set in the US by Consumer Price Index numbers which missed expectations. CPI fell 0.1% in May, for a second drop in three months. The Federal Reserve pressed on with plans to raise interest rates and expects to do so again this year. But those weak inflation prints have certainly sowed doubts about more aggressive monetary tightening in market minds. Note that only one more Fed hike is needed to completely erode the Australian Dollar’s long-held yield advantage over its US big brother. The prospect that said hike may not come, and even if it does that there will be few more, is clearly Aussie supportive.

Then came that domestic data. The Australian labor market had a blockbuster May. 42,000 net new jobs were created, and market forecasts of just 10,000 were duly laughed out of court by Aussie buyers. Even more encouragingly, full-time job creation was back on track too, and then some. Previous data had been worryingly light in that respect.

All of the above was enough to see AUD/USD push up to two month highs, where it broadly remains. So what of this week?

Well, the coming five sessions don’t offer any obvious scheduled data points on which to hang much of a fundamental forecast for either the ‘AUD’ or ‘USD’ side of things. The Aussie has been vulnerable in the recent past to disappointments out of China’s economy, but there doesn’t seem huge opportunity for action on that front either.

A lack of likely market movers could leave the currency struggling for reasons to build on its gains. After all, while lower Australian rates are now all but priced out for the foreseeable future, no rises are expected either, according to rate-futures markets. By the same token there are no obvious traps lurking for a clearly more bullish Aussie Dollar either.

Tuesday might offer modest action. Quarterly house price data will be released then, as will the Reserve Bank of Australia’s last set of policy meeting minutes. However, both may prove a little historic for the AUD/USD market.

There’s little else on the schedule, and that means it just must be a neutral call. So it is.