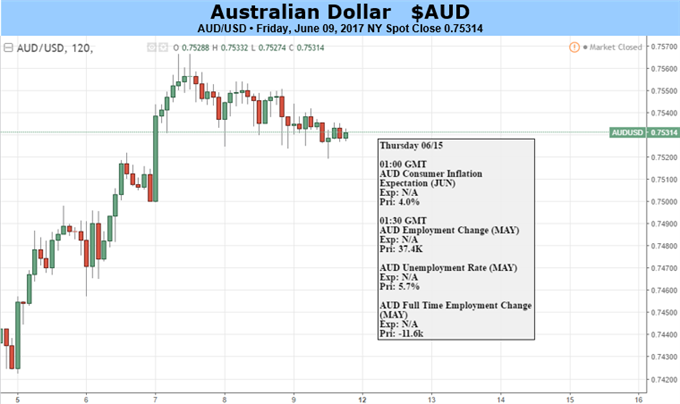 Australian Dollar May Find Itself Overextended

Find out what the trading community thinks of the currencies you love, and those you loathe, with the DailyFX sentiment guide.

The Australian Dollar enjoyed quite a strong week last week but could falter in the days ahead.

An as-expected rise for official first-quarter Gross Domestic Product numbers last Tuesday helped AUD/USD’s advance. Growth may only have met expectations, but there were growing worries before the fact thanks to a nasty current-account miss.

The problem for bulls now is that there’s not a huge amount for them to hope for in the coming week. Yes, there’s a Federal Reserve monetary policy decision in the US, due as ever on the Wednesday. That is widely expected to produce another 0.25 percentage point rise in the Federal Funds Target Rate. But this has been well-flagged and surely must be in the AUD/USD price now.

Fed aside, and back home for the Aussie, investors will get a look at Australian employment levels for May and a peep at Westpac’s consumer-confidence indicator for June. Obviously, these will retain the capacity to move the currency. But they’ll need to shatter expectations if they’re even to begin changing market views that Australian interest rates are stuck at record lows for the foreseeable future.

There will also be a speech from Reserve Bank of Australia Deputy Governor Guy Debelle in Sydney Thursday. But, similarly, there’s little reason to suspect that any radical policy hints will come from here.

On this basis, it seems unlikely that the Aussie will retain the momentum to sustain its uptrend, especially if key Australian export iron ore remains in a price downtrend. It plumbed eleven-month lows last week. AUD/USD looks a little elevated given all of the above, and I think will struggle to maintain its altitude.

The developing story of the UK’s general election may also threaten risk appetite as horse-trading over a working majority goes on. The currency tends to suffer when that appetite is low.