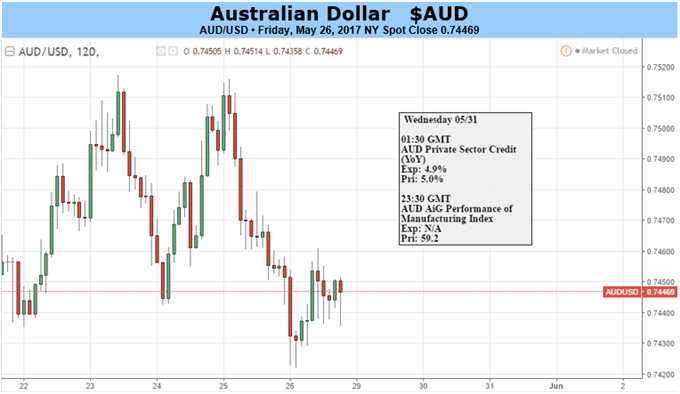 So, it’s your favorite currency. Who agrees? Check out our sentiment page for an idea of the company you’re in.

The Australian Dollar ended last week more or less where it started it, vindicating the neutral call made on these pages before the fact.

However last week was a relatively light one for economic numbers. That left the US Dollar, interest-rate differentials and oil prices very much in charge of AUD/USD.

As far as markets can tell US rates are very likely to go up again next month. Australian rates are stuck at record lows and, while the next move is thought likely to be a rise, it is not expected this year and possibly not until well into the next.

That means further erosion of the Australian Dollar’s yield advantage over its big US brother, but probably no more than is already in the AUD/USD price.

This week there are a lot more data for investors to chew over. They’ll get a look at Australia’s Performance of Manufacturing index for one thing. This is analogous to the Purchasing Managers Indexes released elsewhere.

Perhaps more importantly there is also plenty of housing-market information. This will be big news for investors because they know it is also big news for policymakers at the Reserve Bank of Australia. Building approval levels for April will see daylight on Tuesday, with new home sales levels for the same month coming out on Friday.

If these manage to buck the frankly awful trend suggested by March building permits’ horrible collapse, then there could be some relief and upside for the Aussie. However, if they don’t then the slip could be nasty.

By the same token, China’s official and private manufacturing PMI snapshots could unsettle the Aussie if they suggest that the decelerating pace now clear in both series is still with us. Moody’s hack at its China credit rating last week has put the world’s second-largest economy in an unwelcome spotlight, even if the agency’s worries about both debt and growth are focused some time ahead.

Of course, all these numbers might surprise markets to the upside, in which case next week may contain many happy days for Aussie bulls. However, the balance of past data and probability suggests that they may not, in which case an Australian Dollar already knocked by interest-rate differentials could struggle to gain.

So, it’s a bearish call. Just.