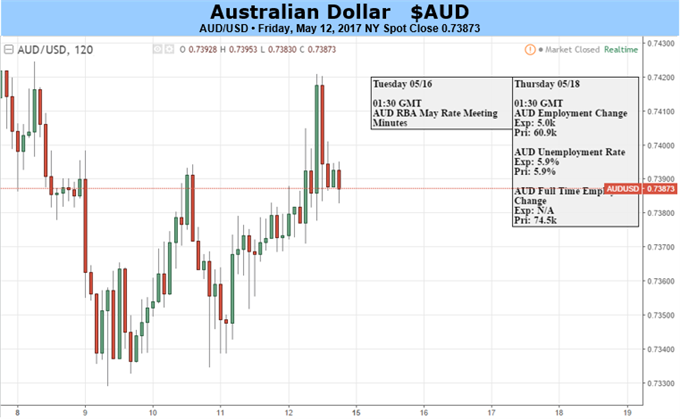 What will decide Aussie’s fortunes though to mid-year? Check out the quarterlyDailyFX Forecasts

The Australian Dollar got down to four-month lows against its US cousin last week and has already slid about 2% this month.

Investors have been scared off by lower commodity prices, particularly when it comes to iron ore. That’s Australia’s main raw-material export and there appear to be inceasing worries about the durability of Chinese demand into the second half of the year. Oil-price falls didn’t help the Aussie either, but they at least saw some reversal as the week went on.

On the domestic front there was also a nasty collapse in bulding permit approvals. Obviously one feeble data point need not flag certain disaster. But given this series’ connection to future construction plans, investors are certainly casting nervous glances at the housing market.

Then of course thre are those interest-rate differentials. The US Federal Reserve is thought all-but certain to raise rates in June, with a further rise after that still its central expectation for 2017. Two stateside hikes would cancel out the Australian Dollar’s already-eroded yield advantage over the US.

Rate-futures markets do not expect any change to the RBA’s record-low 1.5% cash rate this year.

This is the backdrop against which the Australian Dollar will sail into a new week. Its problem is likely to be that there’s not enough on the data slate to decisively change any of the above.

We’ll get a look at Chinese retail sales and industrial production on Monday. If these are steady as expected then the numbers may pass the Aussie by. Any unexpected weakness however will only burnish the ‘China slowdown’ story and may make life tough for the currency. Australian employment numbers are coming up on Thursday but again it may take a shock here to move the AUD/USD dial either way.

What we can see from the chart below is that buyers did at least step back in at those four-month AUD/USD lows, if not with huge conviction. With that in mind a neutral call might tempt but, given that there’s simply not enough scheduled meat for investors to bite on this week, a further meander lower for the pair looks like the most convincing fundamental bet.