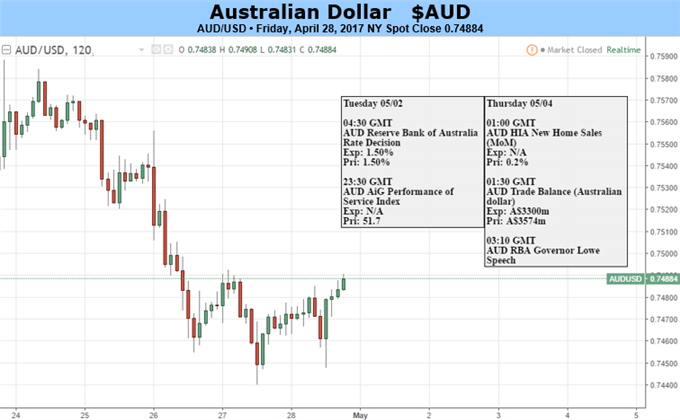 It may be your favorite currency, but who’s with you? Take a look at the DailyFX sentiment page.

This looks like a nervy, tricky week for an Australian Dollar which has been stuck in a downtrend since mid-March. There are tentative signs that that trend is slowing, and that some sort of AUD/USD base might form around current levels. But they are tentative.

It’ll be a tale of two central banks unfold for the Aussie, too. Monetary policy decisions are due on Tuesday from the Reserve Bank of Australia and on Wednesday from the US Federal Reserve.

It’s the Fed that is likely to have most impact, but neither may have much.

After all, to say that the RBA is expected to leave its Official Cash Rate (OCR) at the record low of 1.5%, at which it has languished since last August, is to understate the case. The ASX 30-day interbank cash futures implied yield curve (a longhand way of saying “Australian interest rate bets”) implies a 98% chance of no change on Tuesday.

Indeed, it doesn’t price in any change to the OCR this year, and hasn’t for some time. But last week’s news of an admittedly modest miss for Australian consumer price rises in the first quarter has only made markets more sure that there’s “nothing to see here” when it comes to the RBA.

The Fed isn’t expected to alter policy on Wednesday either, although markets do see more rate rises ahead this year even though much US economic data isn’t quite as strong as it was. Last month even a relatively hawkish Fed wasn’t enough to see the greenback rise in response. The Fed seems unlikely to sound any more hawkish this month, so there may be some Aussie respite in prospect there.

There’s also the final round of France’s presidential election looming on Sunday May 7. Polls suggest an easy win for the centrist Emmanuel Macron against euro-skeptic right-winger Marine Le Pen, but any boost for risk asserts on the fact of this may have to wait until next week.

Manufacturing data will come from China, in the shape of the official and private Purchasing Manages Indexes for the sector. If these come in strongly they might put a bit of floor under the Aussie, but the currency isn’t always a China proxy and this support is not guaranteed.

All up then, this week looks like a neutral one for the Australian currency, albeit one within a broader AUD/USD downtrend. For most likely risk events, there’s a countervailing chance of some support from elsewhere, although the hair-trigger geopolitics of the moment could mean that all bets come off at any point.

Yes, neutral it has to be. 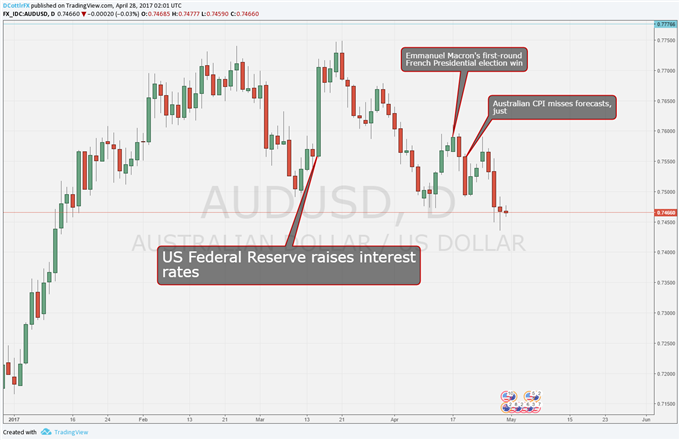