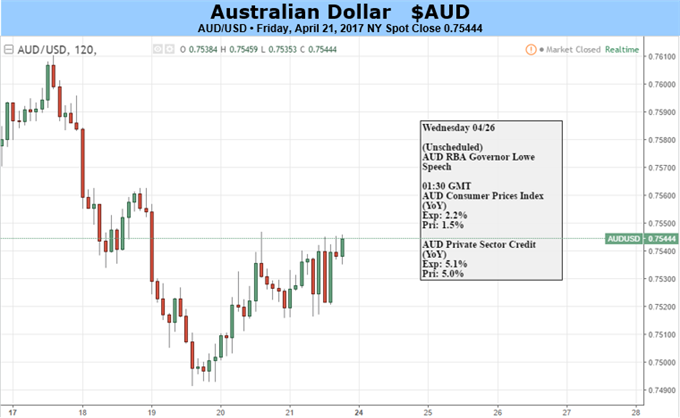 Would you like to know more about financial-market trading? The DailyFX free trading guide is for you.

Australian Dollar bulls didn’t have a great week last week. Can they hope for a better one ahead?

International tensions over North Korea and Syria still simmer, damming the global risk appetite which rather benefits the Aussie when in full flood. Then there’s Sunday’s first round Presidential vote in France. These things overwhelmingly tend to go to a second runoff. That means a tangible result may not come until May 7. But a strong showing this week from the anti-EU Marine Le Pen would see the markets heading for perceived haven assets in a big way.

Again, this might bode ill for the Aussie, despite the relatively strong performance of its home economy.

Commodity prices will also play a part and there, too, seems little cause for hope. Iron ore is Australia’s top export commodity. Its price has fallen sharply since February as markets fret about steel oversupply in China, and the long-term durability of raw-material demand there, for all its current vigor. Iron ore prices are down more than 30% since late February, and off 18% for 2017 to date. It’s probably no coincidence that the currency has been meandering lower since February as well.

Then there’s the weekly economic calendar. This doesn’t look like a major prop for the Australian Dollar either. Most of the banner events will influence the “USD” side of AUD/USD, probably to the downside if they keep hopes of more interest rate increased from the US Federal Reserve intact.

We will get an official look at Australian consumer prices for the first quarter of this year on Tuesday. They rose at a sluggish 1.5% in the final three months of 2016, but the rate has been increasing for three quarters. If it continues to do so then the current market forecast of ‘no change’ to Australia’s record-low. 1.5% base rate this year may be threatened. That could support the Aussie. However, it will probably take a lot more than one data point to put that old thesis in serious jeopardy.

Reserve Bank of Australia Governor Phillip Lowe will also give a speech on Tuesday. We can have no idea of what he may say, of course, but a guess that he might mention a stronger Australian Dollar as an undesirable policy headwind would be an educated one. RBA officials have after all said this before.

Given all of the above, a bearish Australian Dollar call it has to be for the week ahead, but keep an eye on commodity prices, CPI and that Tuesday speech as possible threats to that prognosis.

There may be justifiably hope for better times ahead though. Trade data out of Japan and growth numbers from China both speak to a global-trade economy starting to really move again. And if any currency likes an upsurge in global trade, it’s the Aussie. 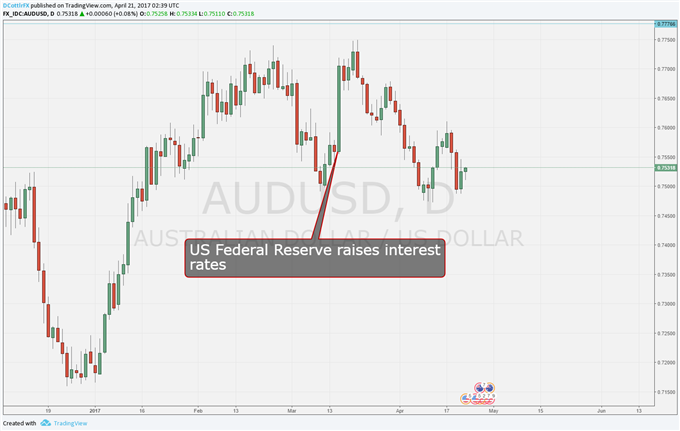