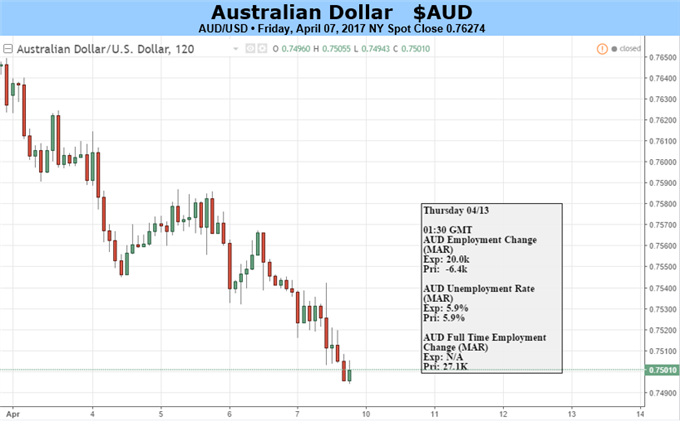 Obviously last Friday’s US strike on Syria makes any sort of near-term financial forecast more difficult but, from what we know so far, it’s likely to weigh on the Australian Dollar.

At the time of writing (mere hours from the strike, at 0500 GMT on April 7), the Aussie has been a victim of the usual knee-jerk turn away from currencies, commodities and stocks closely correlated to the global growth cycle, known as “risk-on assets”. But it’s too soon to say what comes next in Syria, and therefore what comes next for these markets.

Clearly a protracted campaign of US and possibly broader Western military involvement is likely to keep all risk-on assets under possibly severe pressure. And in truth the Aussie Dollar had its problems before the Syria news ever broke. It had slipped for six out of seven sessions up to last Friday. 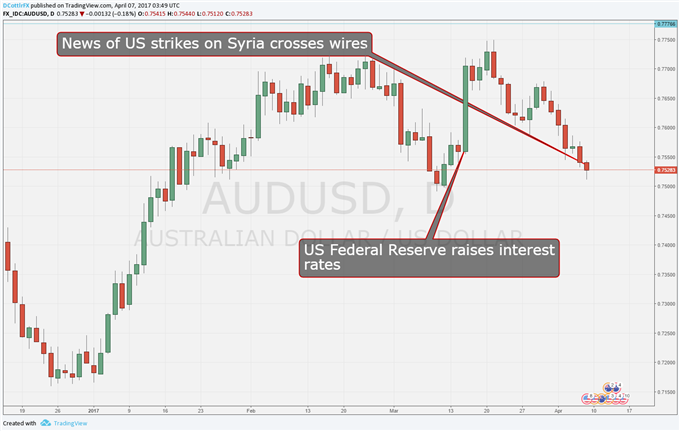 The intertest rate backdrop is that US rates will continue to rise while their Aussie counterparts are going nowhere this year, and possibly into next (protracted hostilities involving the US in Syria could change all this, of course). The Reserve Bank of Australia has said little which might challenge this view. More importantly, it put its worries about a stronger currency front and center in the

This is not an environment conducive to a higher Australian Dollar.

That said, the picture is not entirely gloomy. Australian stocks have been rising quite nicely. Buyers have been encouraged by still-high prices for the country’s main raw material exports. They’re hopeful of even greater demand from China where vast, new infrastructure projects are in process, including plans for a gargantuan economic zone in depressed Hebei province. Recent research from Deutsche Bank suggested that foreign investors have returned to the Australian equity market in some force, with offshore interest outpacing local buying for a change.

Had it not been for the US action in Syria, this might have been a neutral or even mildly bullish forecast for the week ahead. There’s plenty of key Chinese data after all, including consumer prices, loan levels and trade figures, all of which could lend the Aussie support.

As things are though, it has to be a bearish call. The March lows around 0.75 are uncomfortably close for AUD/USD.

So, it’s your favorite currency, but who agrees with you? Check out the DailyFX sentiment page.