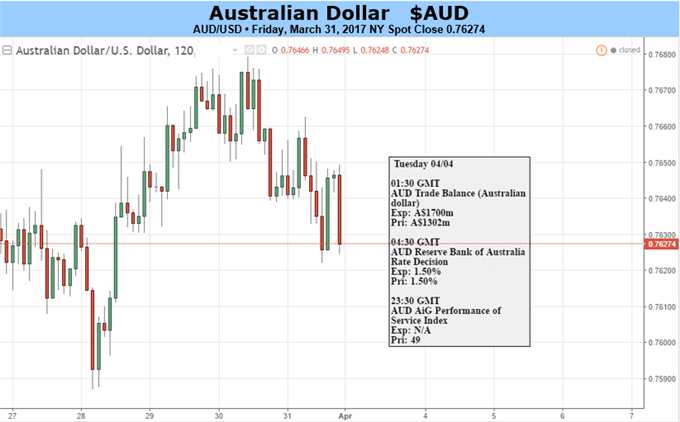 Australian Dollar Will Have To Let Its US Cousin Drive

Many bourses wilted with Wall Street following the US administration’s healthcare-reform stumble. But investors in Australian stocks chose to accentuate domestic positives instead, taking the ASX 200 benchmark up to two-year highs.

The Australian Dollar has yet to do the same, however. At any moment, the markets’ take on US monetary policy is likely to drive AUD/USD, much as it does for any other currency pair with ‘USD’ on either side.

And there’s little on this week’s horizon that is likely to change that. Yes, we will get a monetary policy decision from the Reserve Bank of Australia. But if there’s anyone who thinks Aussie interest rates will be rising, or indeed falling, from their current, record-low of 1.5% on Tuesday then they’re keeping it mighty quiet.

From official commentary, we know that the central bank is worried about weak inflation and high levels of household debt. We also know that it doesn’t necessarily want to see its currency much higher. None of this argues for a rate move. So, the picture is likely to stay as it is now, with steady local rates in the foreground, against a backdrop of rising US ones.

There’s also plenty of key US economic data due this week, including the biggie – official labor-market stats – for which we must to wait until Friday. Assuming these numbers don’t diverge hugely in either direction from market expectations, the overall picture looks boringly neutral for the Australian Dollar, at least against its US cousin. 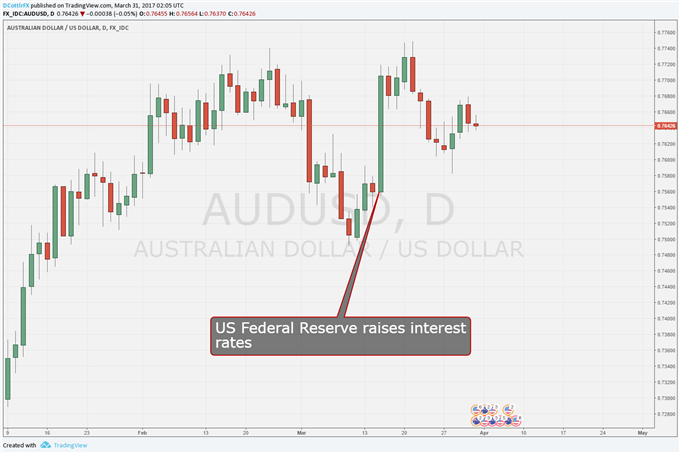 There is one piece of good news from the bulls’ perspective. The upward AUD/USD jolt delivered by the US Federal Reserve’s “dovish rate hike” last month has arrested what threatened to be a deeper decline. It has returned the pair to a trading range which has held since late February, and keeps the Aussie quite close to its highs for the year. That said, the range looks likely to endure this week.

What will drive markets and the Aussie Dollar in the second quarter? See our forecasts to find out!