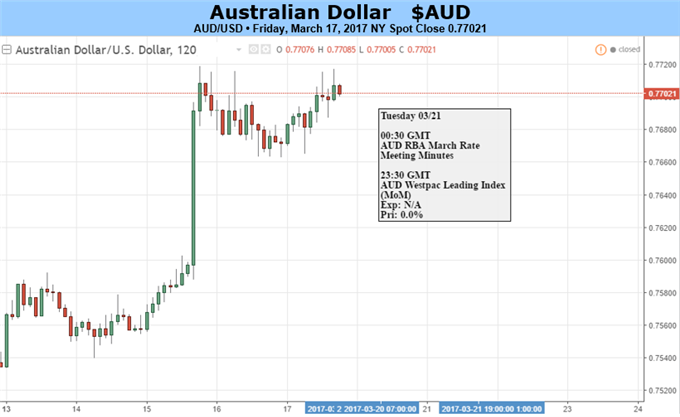 Last week I wrote that the Australian Dollar stood to suffer if the US Federal Reserve delivered on its well-flagged interest rate hike, and stuck to its guns regarding the prospect of two more this year.

Well the Fed did deliver. But the Australian Dollar rose against the greenback, admittedly along with just about everything else. And a new expression entered common usage: the “dovish rate hike.”

Now the story goes that the Fed just wasn’t hawkish enough for the market, and that is why the Dollar fell in the wake of what, intuitively, looked like a pretty supportive performance from Fed Chair Janet Yellen and company last Wednesday.

I’m in quite good company. Goldman Sachs’ chief economist Jan Hatzius reportedly responded to the question “was it (the Fed’s decision) a big dovish surprise overall,” with a succinct “no”.

Anyway, confession over. What of the coming week? Well, there isn’t a lot of first-tier data to influence either side of the AUD/USD cross. We will see the minutes of the Reserve Bank of Australia’s last policy meeting on Tuesday. But that March 6 conclave was a “steady as she goes” affair if ever there was one, and official RBA commentary in the past few weeks has strongly suggested that Aussie interest rates are going nowhere soon.

Concurring, the futures markets aren’t pricing in any changes to the record low 1.5% official cash rate this year.

For the moment, AUD/USD is holding on to most of its Fed-inspired gains. But it’s still unable to close the gap between this year’s peaks and the highs it fell from right after the US Presidential election last November ushered in the “Trump trade.” The pair has failed at those peaks twice this year, and the coming week offers little obvious sign that it can break through them, even if it offers few clear hazards either.

The Fed is driving: AUD/USD

Bulls might use a comparatively quiet week to take another tilt at the highs as long as they remain within striking distance. But if they didn’t do that on the back of last week’s post-Fed momentum, it’s hard to see why they’d risk it now.

So, a neutral call it has to be.

We’re only weeks away from first-quarter’s end. How are the DailyFX analysts’ forecasts holding up?