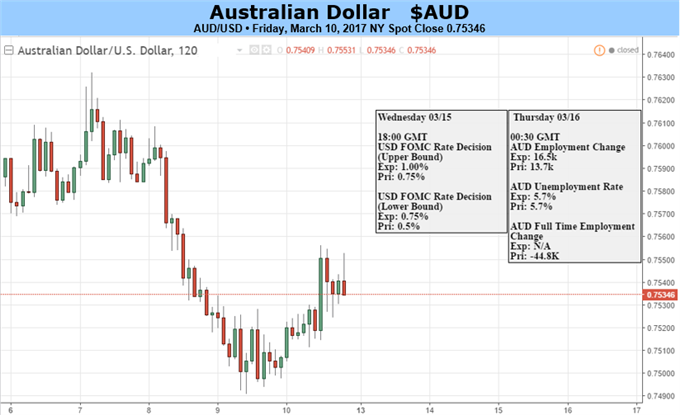 At face value this ought to be one of the easiest weeks in which to forecast Australian Dollar direction.

The Aussie’s long fightback from its post-US-election lows was stymied in late February by a swelling chorus of comment from the Federal Reserve which at one point had markets pricing the probability of a March interest-rate hike at 98%. Even long-time counsellors of caution such as Fed Board member Lael Brainard seemed relaxed about a move. Chair Yellen seemed to all-but set the seal on a March rise last week.

And the Fed will give its March policy call on Wednesday.

By contrast last week’s monetary policy conclave at the Reserve Bank of Australia evinced no sense of urgency whatsoever to move Aussie rates from their record lows.

So, interest-rate differentials are driving, US rates are going up and Aussie rates are staying put. It has to be a bearish call, right? Well, yes, it probably does.

The Fed’s in charge, but for how long?: AUD/USD 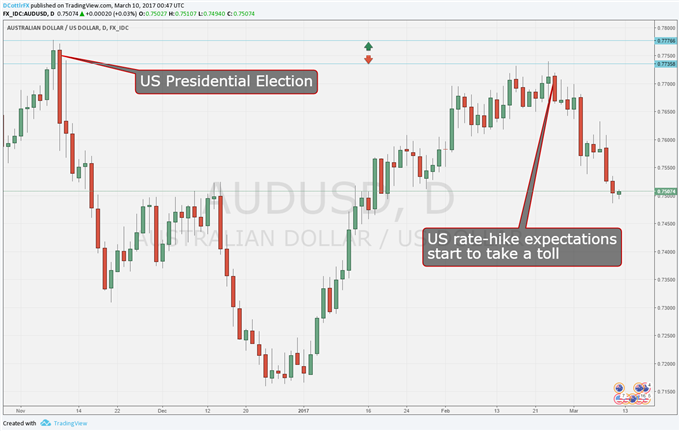 But there are some new points in the Australian currency’s favor which we need to consider, even if they won’t change the game as soon as this week.

The latest Commitment of Traders snapshot from the Chicago Board Options exchange showed the largest net-long position in the Aussie since May, 2016. Now these numbers cover the week of February 28. That’s’ quite historic by foreign-exchange market standards. It’s possible that our speculative friends have been caught out by the vehemence of Fed hawkishness since and bailed out. But it’s also possible that they didn’t. And in that case. there’s clearly significant bullish support for the currency, Fed and all.

Moreover, various major banks worried aloud this week that Australian interest-rate pricing might be too low. At the moment, markets think rates could be on hold all through this year, and possibly well into next. But Citibank noted that Australian economic newsflow has “increasingly outperformed analysts’ expectations.” It went no further but UBS commented last week that, “the current record low cash rate might now just be too low.”

Goldman Sachs went the whole hog. Last Wednesday it brought its already hawkish rate-rise call in from February 2018 to November this year- with a 60% probability. Now this is an outlier, of course. But it’s potentially significant nevertheless.

The Australian Dollar is unlikely to stand up to any US-Dollar bullishness unleashed if the Fed does indeed raise rates. It is likely to struggle this week. But it’s longer-term prospects could look a lot brighter.

The year’s first quarter is getting old. How are the Daily FX analysts’ forecasts holding up?