Australian Dollar May Languish If Only For Lack of Clues 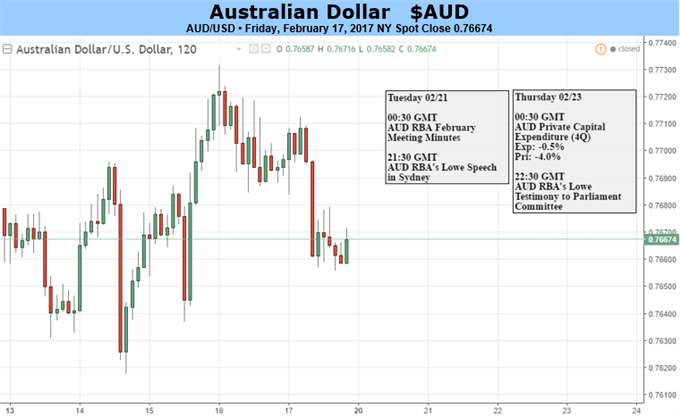 The Australian Dollar caught a couple of breaks last week in the shape of two surprisingly upbeat indicators.

The first was the National Australia Bank’s business-sentiment snapshot. This found commercial Australia feeling better about itself than it had for about nine years. Sure enough, the Aussie got a boost. Then the next day came Westpac’s consumer confidence roundup. That was perky too. Up went AUD/USD once again. 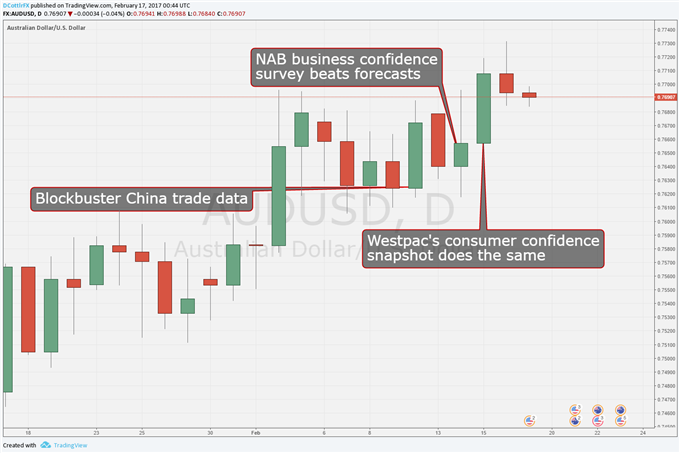 Had these indicators not beaten expectations then the Aussie would have had a much tougher time. Federal Reserve Chair Janet Yellen was front and center after all. She left the door to higher US rates wide open in her Congressional testimony, saying that it would be “unwise” to wait too long before removing monetary accommodation.

Her colleague William Dudley of the New York Fed seemed to hammer this point a day later. He said that a rate rise could come “soon.” Sure enough, a March move is now very much in play.

That leaves the interest-rate support all on the “USD” side of AUD/USD.

For all the better recent Australian indicators, interest rates there are at record lows and likely to stay that way for some time. How do we know? Well, the most recent statement on monetary policy from the Reserve Bank of Australia fretted that current positive factors such as higher raw material prices may not last. It also worried that the economy may not expand strongly enough to meaningfully bring unemployment down.

It certainly didn’t in January, judging by the data. A rise in headline job creation was muted by a modest tick lower in the unemployment rate and a huge loss of full-time jobs.

The upshot of all this is that the prognosis for Australian interest rates has not changed. They are low. They are likely to remain so until the RBA is convinced that the economy is revving durably. And it isn’t.

The coming week is unlikely to alter that view, if only because scheduled economic clues are scant. There’s no first-tier data out of Australia in prospect at all, apart from a look at wage costs on Wednesday. There are a few interesting second-rank reports, notably the ANZ/Roy Morgan look at consumer confidence, and private capital expenditure data. We will also hear from RBA Governor Philip Lowe. He speaks in Sydney on Tuesday.

Assuming he sticks to the “steady as she goes” script, none of the above seems likely to shift the needle for AUD/USD. It clearly wants to meander higher in response to good Australian numbers. But it is going to take either the dialing back of US rate-rise expectations or the emergence of a more stridently hawkish RBA to really give AUD/USD bulls room to charge.

Neither seems at all likely this week, so a neutral call it must be.

Alright, so it’s your favorite currency. But does anyone agree with you? Take a look at the DailyFX sentiment page.