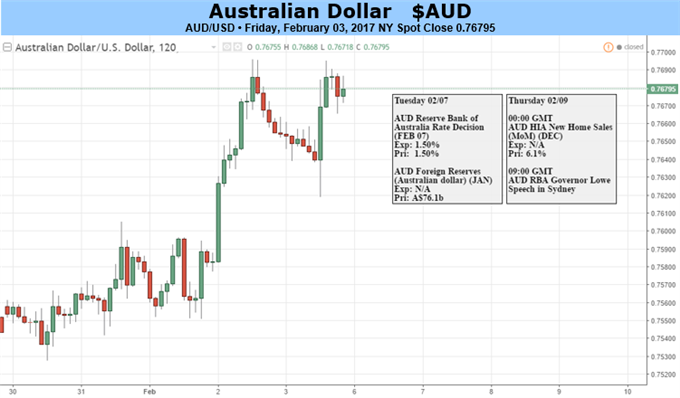 Australia posted its biggest ever monthly trade surplus in December, A$4.5 billion (US$2.6 billion). This breezed past all forecasts and put a second straight surplus on the board, snapping a chain of deficits stretching back to March 2014.

But this upside shock was about more than the numbers. It now seems very likely that net trade will make a positive contribution to Australian growth in the fourth quarter, having dragged on it for the previous two. That’s very handy because the third quarter saw a rare overall GDP contraction, raising the grim specter of two straight falls, which constitute technical recession. Australia hasn’t had one of those for an astonishing 25 years.

The thesis that that specter had been diminished if not entirely exorcized by those blockbuster trade numbers was behind AUD/USD’s sudden spurt up to three-month highs last Thursday. The backdrop was conducive, too. The US Federal Reserve had just made what markets regarded as a rather “dovish” statement on monetary policy, taking some wind from the US Dollar’s sails thereby.

Chinese Purchasing Managers Index data proved mixed. The official manufacturing PMI managed to just beat expectations, but the private, Caixin version missed them by a wider margin. This knocked AUD/USD a bit on Friday but it didn’t surrender all of those trade-inspired gains. 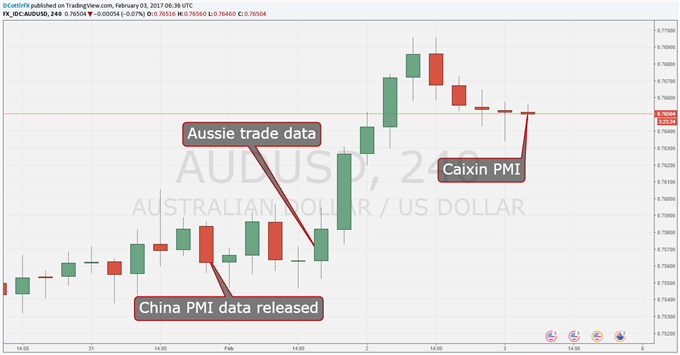 So, the Aussie is clearly well underpinned now, but is there anything coming up that’s likely to push it much higher? Well, probably not. The meat of this week for the currency will come on Tuesday when the Reserve Bank of Australia next sets monetary policy.

It's not expected to alter current record-low interest rates – on hold at 1.5% since August. But it may return market focus to the domestic Australian economy. There, consumer demand and pricing levels look a lot less healthy than does the white-hot export sector. RBA Governor Phillip Lowe will speak in Sydney the following day.

It’s also a quiet week for scheduled international economic news. That could of course leave investor focus squarely on any unscheduled developments which might emanate from the Donald Trump White House. That news-flow can’t be predicted (as nervous global markets are coming to understand).

But on the strength of what can be predicted, this looks like a more boring week for the Australian Dollar than that which preceded it, even if it need not be a particularly bad one for those bulls.

What other traders make of your favorite currency? The DailyFX sentiment page can answer that question.