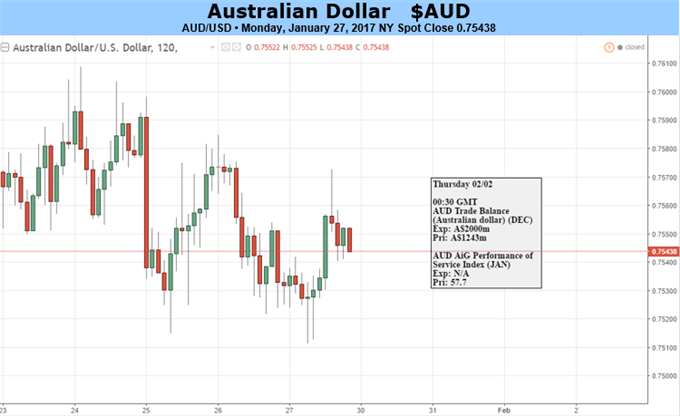 Australian Dollar Stuck, But Not Stricken

This week’s fundamental forecast for the Australian Dollar was nearly bullish, but it ended up narrowly neutral so we’d better look into reasons why.

The Aussie has staged a convincing fightback since November when the ravages of the “Trump trade” were inflicted on it. Of course, the Australian currency wasn’t the only one to fall before its US cousin. The greenback was energized across the board by hopes for a fiscal rocket when Donald Trump gained the Oval Office. But AUD/USD fell hard, from 0.77699 in early November, down to 0.7125 before it turned around.

The Aussie’s return since has been quietly impressive as that Trump trade was rethought. Indeed, it has now clawed back about 60% of losses incurred. And it has done so most recently despite a distinct lack of interest-rate support. While US rates are still thought likely to rise this year, and possibly even quite sharply, their Australian counterparts look stuck at record lows.

That likelihood may have risen this week, as Australian consumer price inflation missed forecasts for 2016’s final quarter. At 1.5% annually it also moved a little further away from the Reserve Bank of Australia’s already distant 2-3% medium term goal.

Interest-rate support isn’t the only support there is of course. And the Aussie has managed to find three other sources. First has come the prospect of stable, if not stellar, growth in China. Then there have been sharp rises in the price of both coal and iron ore, Australia’s key commodity exports. Lastly comes the White House, and its occasional pronouncements to the effect that the US Dollar is generally too strong.

However, the coming week is rather short of scheduled economic news likely to benefit AUD/USD bulls, while it’s replete with likely US Dollar supports. Investors will get a look at Australian trade data, business confidence and private credit levels. All these are interesting, naturally. But they won’t distract overall market attention from the US Federal Reserve’s monetary policy decision on Wednesday, nor from official US labor- market statistics, including the crucial nonfarm payrolls count. Almost nothing can at the best of times.

Any hint that the Fed remains on course to push rates up thrice this year is going to put a very solid floor under the US Dollar.

We will get a look at China’s latest manufacturing numbers on Wednesday, and they always have the capacity to move the Aussie. This looks like a week more focused on the USD side of AUD/USD however. For that reason, calling it neutral this week seems to make sense simply for lack of obvious catalysts, even if the Australian Dollar’s latest rally remains very much in place.

The wildcard, of course, is any economic comment which may emanate from that Oval Office thousands of miles from Australia. But that is too tough to call.

AUD/USD fightback still on, but may stall:

How do the markets feel about your favorite currency? Take a look at our sentiment page.