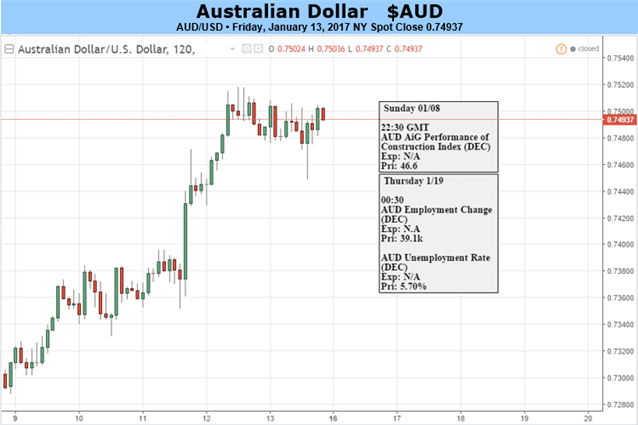 Is the Australian Dollar in a sweet spot? Well, that might be premature optimism but it’s certainly in a better place than it was back in November.

In the last two weeks, the currency has made back about half of the losses suffered against its big US brother in the aftermath of Donald Trump’s shock election win. How? Higher prices for Australia’s two raw-material export mainstays coal and iron ore have helped.

They’ve risen on hopes for better demand out of China. These hopes in turn hang on twin pegs. The first was a shock December surge in Chinese factory gate prices, to levels not seen since 2011. The second is renewed hope for China’s overall economic showing in 2016. We’ll get official Gross Domestic Product figures on Friday January the 20th, but an estimate already released by the influential National Development and Reform Commission put growth at 6.7%. That would be bang in the middle of Beijing’s January range estimate and, even though it would still be the slowest growth for nearly thirty years, it would be more than enough to offset hard-landing worries.

This belief seems to be very strong. Even a set of Chinese trade data which might charitably be called patchy failed to put a dent in AUD/USD on Friday. It’s possible that currency traders remained focused on rising imports, to the point where they’ve managed to overlook exports’ 6% swoon.

The Australian currency’s other big helper has come courtesy of a certain amount of rethinking about what President Trump will mean for the market once he’s behind the Oval Office desk. Trump was maddeningly elusive in his first proper meeting with US journalists this week, failing to put much flesh on the bones of his policy program. Currency investors who’d frantically bid the greenback higher since November, causing it to rise against just about everything including the Aussie, are now more inclined to wait until they hear concrete policy proposals.

Can the Aussie bull-run last another week in this atmosphere? Well, there are risk events, of course. China’s GDP data will be be one, but there are some scheduled data darts that will hit closer to home. We’ll get official employment statistics from the Aussie’s home country, along with home loan volumes and, perhaps most tellingly, a look at January’s consumer confidence. November’s retail sales numbers have already underwhelmed.

However, assuming no huge shocks in these numbers, there would seem little reason to doubt that AUD/USD can go higher yet. It’s probably also worth keeping an eye on President-elect Trump’s Twitter feed!

Quiet achiever? AUD/USD has made back a very good chunk of its “Trump trade” falls. 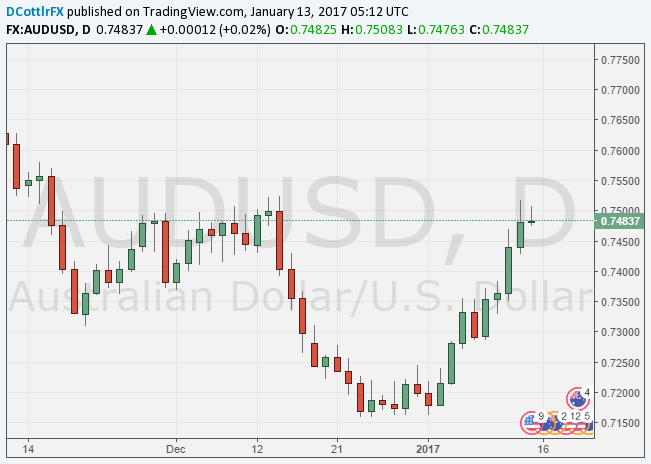 Would you like to know more about trading the markets? DailyFX webinars are good places to start.