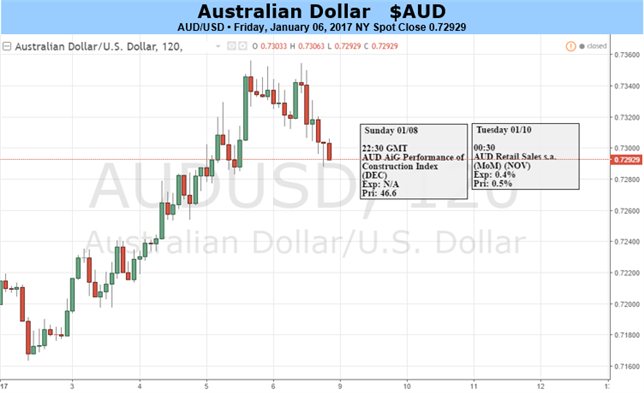 The Australian Dollar is a little short of obvious data catalysts this week. That could leave the current, new and rather bullish trend intact, if for no other reason than that investors are unlikely to see anything dramatic enough to change their minds.

There’s been a clear, recent Aussie fightback from the battering handed out by the markets since Donald Trump’s election. AUD/USD tumbled from 0.77656 back then, in late November, to 0.71573 on December 26. The Australian currency wasn’t alone here of course. The rampant greenback gained on just about everything as markets eyed not only a fiscally expansive White House, but higher interest rates as well.

Down, but clearly not out - AUD/USD (daily chart) 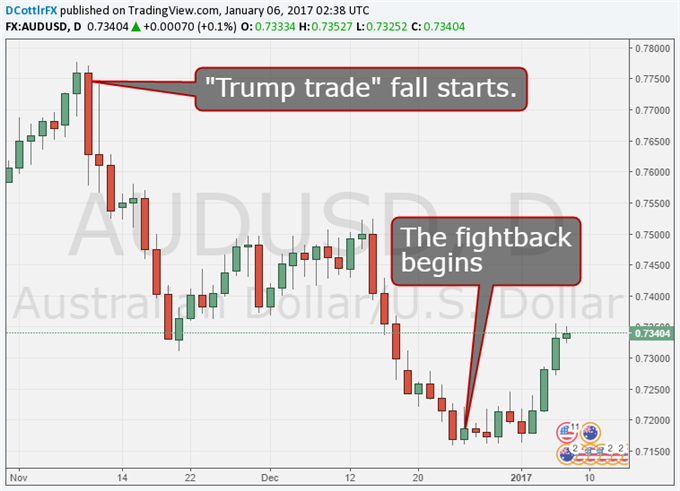 However, that AUD/USD low point looks like something of a base for the “Trump trade” fall. Bulls have scored substantial daily wins in the past three sessions, taking the pair up to the 0.73500 area.

Then there was Friday’s stunning Australian trade data. It shocked forecasters with the first surplus for nearly three years, and quite a big one too. Trade was in the black to the tune of A$1.2 billion ($US900 million) when a A$500 million deficit had been expected.

The question to ask now is whether anything on the data slate is likely to upset the current modest feel-good mood.

At face value the answer is “no.” We’ll get a look at Australian building approvals, retail sales and credit card purchases through the week. Important though all these things are as pixels on the bigger economic screen, none tends to be a major Aussie showstopper.

Risks to this relatively calm scenario probably come from the “USD” side of AUD/USD. It’s not a big week for US numbers either, but the advance look at crucial December’s stateside retail sales, and the University of Michigan’s monthly snapshot of consumer sentiment both have the potential to move the pair, and they don’t come until the end of the week.

The Australian Dollar’s wildcard this week probably comes from Chinese data, of which there is a little more. Tuesday’s consumer price index and Friday’s trade data could see the Australian Dollar playing its sometime role as the markets’ favorite liquid China proxy.

However, assuming no surprises here, the nascent Aussie Dollar fightback should continue to reap the benefit of any doubts.

Would you like to know more about trading? DailyFX analysts’ webinars are a great place to start.