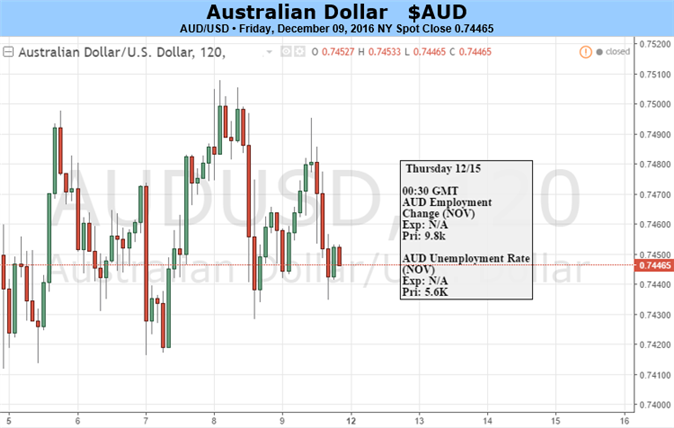 The Australian Dollar has held up rather well given a week of domestic data which might well have tried bulls’ patience. So it’s tempting to suggest that, if first-tier data didn’t knock the currency too hard, then this week’s generally second-tier releases won’t either.

And the currency had a lot to ride out.

The Lucky Country’s third-quarter Gross Domestic Product release tested that particular sobriquet almost to destruction, with growth coming in way below what markets had expected. Then came some more bad news, in the form of an unexpectedly yawning trade gap.

But look at the Aussie. AUD/USD started this week at 0.74558. It looks set to end it little changed, despite all of the above.

However, this fundamental vigor has its roots in three factors. The first is interest-rate support. Financial markets do not at this stage believe that the Reserve Bank of Australia will be cutting their Cash Rate much below the current record low of 1.5%. That’s if they opt to cut it at all. Even at record lows Australian rates still look pretty tempting to those who want developed-market, solid-credit-rating exposure. Objectively 1.5% isn’t much, but it’s more than you get across the US, much of the Eurozone or the UK.

The second is a bit of seasonality. Weaker third quarters are not wholly uncommon in Australia, or indeed in other developed economies. They often set the stage for a holiday-backed fourth quarter fightback. According to wire reports, analysts still expect that we will get one, and that the shock growth contraction seen in the quarter to September will not morph into Australia’s first technical recession for more than twenty-five years.

The third is China. Signs of stabilization there bode well for Australia, given its vast raw material export links with the world’s number two economy. The Aussie got a brief fillip last week as Chinese trade data came in strong.

So, what can we look forward to next week? Well, on the domestic slate we have the National Australia Bank’s business confidence index for November. That comes up on Tuesday. Then comes the Westpac consumer confidence indicator for December. This will be an interesting one as it will be one of the first gauges of likely holiday spending appetite.

Lastly we have the official employment change and unemployment rate figures. All these data offer more clues as to how the fourth quarter is likely to play out. This has become a lot more important since last week. Any signs that it may not offer the spring-like bounce back from the third quarter’s disappointment could put the Australian Dollar under some pressure.

After all, the Reserve Bank of Australia took the chance to reiterate the baleful effects of a strong Aussie on its mandate earlier this week. More weak numbers may make it minded to do what it can about that.

However, it’s possible of that higher US rates will do some of the RBA’s work for it in 2017, and that the RBA will keep its own council until it sees what the Federal Reserve does. That may see the Aussie ride out another week, even if the data disappoint.

So, how’s DailyFX doing? Check out our analysts’ forecasts.