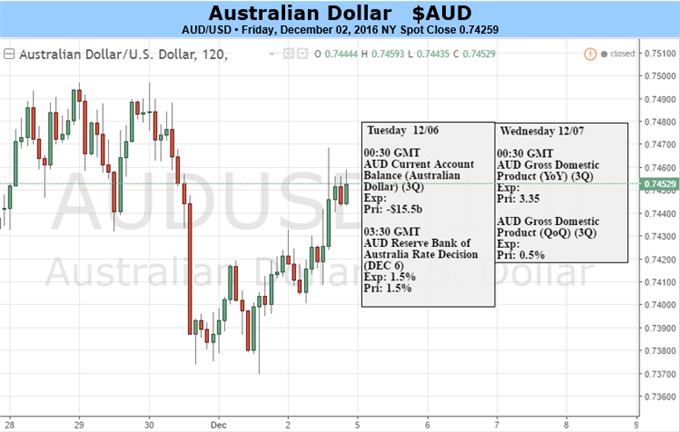 Home-grown event risk returns to the forefront for the Australian Dollar in the week ahead. Most notably, the RBA is due to deliver a monetary policy announcement and third-quarter GDP figures are set to cross the wires.

The central bank is widely expected to remain in wait-and-see mode. Indeed, the priced-in probability of a rate change as implied in OIS rates is a mere 1 percent. This puts the spotlight on the statement accompanying the announcement as investors try to divine where officials will steer next.

Australian economic news-flow has sharply deteriorated relative to consensus forecast over the past month. Meanwhile, front-end yields have moved sharply higher amid a global bond rout in the wake of the US presidential election as firming Fed rate hike bets sent capital flowing into USD-based assets.

On balance, this may be rekindled an appetite for easing at the RBA. Rhetoric suggesting as much in the policy statement may weigh on the Aussie as traders betting on standstill for the coming 12 months readjust portfolios for a move dovish posture.

Third-quarter GDP data may reinforce this dynamic. The report is expected to show that the economy added just 0.2 percent in the three months through September. The year-on-year trend growth rate is seen falling to 2.5 percent. Taken together, this amounts to the weakest performance since mid-2015.

High-profile developments on the external front may also emerge as drivers of price action. Risk aversion may break out if Italians vote “no” at a constitutional referendum held over the weekend or if the UK Supreme Court overturns on appeal a requirement for Parliamentary approval to formally trigger Brexit.

Either outcome may bode ill for the sentiment-sensitive Australian unit as a market-wide tilt toward haven assets translates into losses for higher-yielding commodity currencies. Needless to say, a “yes” vote in Italy and the defeat of the government’s appeal in the UK may boost sentiment and yield the opposite results.