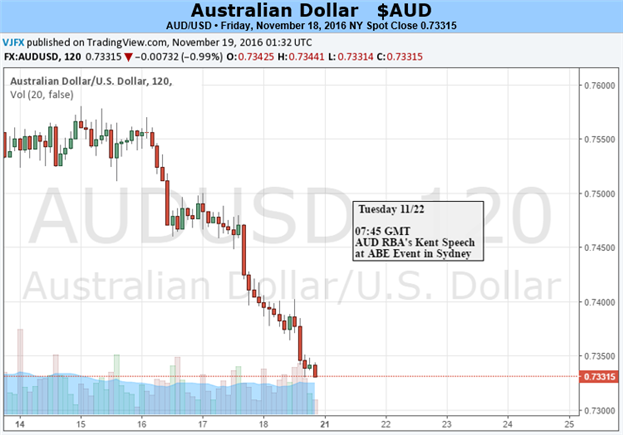 Australian Dollar Mired in Fallout from US Presidential Election

The Australian Dollar accelerated downward as expected as financial markets continued to reckon with the implications of an on-coming economic policy pivot following the US presidential election. Traders are betting that grandiose fiscal stimulus championed by President-elect Trump will prove inflationary, pushing the Fed along a steeper rate hike path. At the same time, the re-emerge of trade barriers may bode ill for countries dependent on the global supply chain, including Australia. That may keep the RBA on the dovish side of the spectrum, accentuating an already deepening policy divergence.

The evolution of this narrative is likely to remain in focus for financial markets in the week ahead. On one hand, established momentum should find few barriers to disrupt continuation. Fed Funds futures put the probability of a Fed rate hike in December at 98 percent, meaning it is all but priced in. Comments from central bank officials over the past week repeatedly suggested that the specifics of any on-coming fiscal boost will be formative to the direction of policy next year. This means that the release of minutes from November’s FOMC meeting and a steady stream of US activity data is unlikely to materially alter the landscape (durable goods orders and home sales figures as well as the PMI survey roundup are on tap). The Australian data docket is close to empty.

On the other, the lull may offer shell-shocked markets a bit of a respite and open the door for corrective profit-taking following ten days of intense directional momentum. The liquidity drain likely to be set off by the on-coming US Thanksgiving holiday may encourage this dynamic. That may translate into a broad-based reversal of recent moves across the asset spectrum. The Aussie has scope to recover in this scenario, retracing some lost ground before dominant thematic forces reassert themselves. Such moves are probably counter-trend at this stage however and may run into roadblocks quickly as headlines about the make-up of the new US administration continue to roll in. The naming of a Treasury secretary may prove particularly potent as markets size up the person at the forefront of team Trump’s economic agenda.